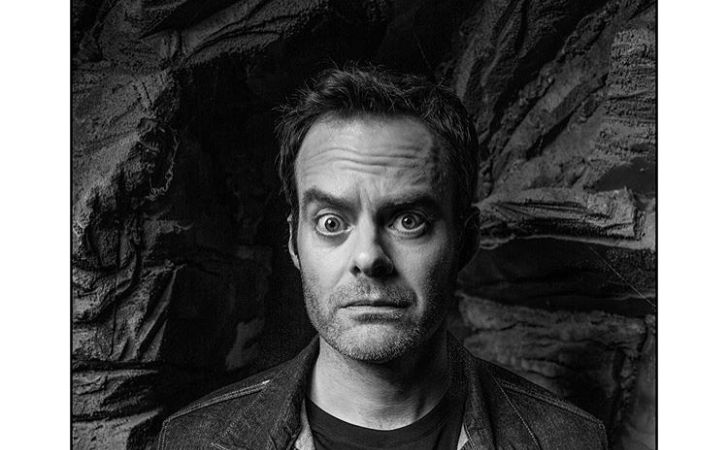 Bill Hader is an American actor, comedian, and writer. He is most popularly known for his work in the American TV show Saturday Night Live!.

Hader has been active in show business for more than two decades now. He is quite popular for his style of comedy which is mostly dark yet witty. He has worked with many popular stars including Kristen Bell, Mila Kunis, Will Smith, Josh Brolin, et cetera.

Bill Hader is a multi-talented personality. He has been fairly successful in almost every field of show business he has tried his hands on. But contributions to comedy and humorous content are his biggest achievement.

Hader’s career skyrocketed after his appearance in the tv comedy show Saturday Night Live. He started working on SNL in 2005 and still makes appearances on the show every now and then.

Born on the 7th of June in the year 1978, Bill Hader’s age is 44 years as of writing. He was born in Oklahoma to Sherri Renee and William Thomas Hader Senior. His father had several jobs in his lifetime and has worked as a restaurant manager, truck driver as well as a stand-up comedian in his free time.

His mother Sherri Renee was a dance teacher. Hader has two sisters of his own and both of them are younger than him. He completed his high school education at the Cascia Hall Preparatory School.

He later tried to attend a major university but failed because of his grades. Hader went on to enroll at Scottsdale Community College but soon dropped out.

Talking about his origins, he has European ancestry which includes English as well as German roots. In his teenage years, Haders admired the popular comedy group Monty Python and was in general a fan of British Comedy.

His early interest in filmmaking and movies is evident from the fact that Hader made a short film named The Glass Menagerie with his friends while he was still in school.

Bill Hader’s first exposure to show business was from his work as a production assistant. He spent almost around eighteen hours a day working on sets.

Hader worked on the sets of movies like James Dean, Spider-Man, Collateral Damage, et cetera. He later started working as an assistant editor for Triage Entertainment but did feel good about his job.

After joining a few improv comedy classes, Hader felt a strong interest to pursue comedy. He made a group of four named Animals from the Future with his friends and began performing backyard shows. This exposure helped him to land a job at Saturday Night Live.

While working at Saturday Night Live, Hader went on to play several characters, one of them was of an Italian host named Vinny Videcci. He also performed mimicry of many celebrities like Harvey Fierstein, Al Pacino, Alan Alda, Charlie Sheen, et Cetera.

During this period he also worked in many movies like Adventureland, Hot Red, Tropic thunder, Year One, et cetera while he was still working at SNL. Hader announced his departure from SNL in 2013 because of personal reasons.

Hader is currently focusing most of his time working as an actor and writer. He has recently appeared in movies like Toy Story 4, It Chapter Two, Finding Dory, etc.

Hader played his role as a leader in a movie named Trainwreck being cast opposite Amy Schumer in 2015. He has also acted and written for shows like Barry and Documentary Now. Hader is all set to star in a movie named Empress of Serenity. Bill Hader has received praise from critics as well as audiences for his work in a dark comedy named Barry.

For his work in show business as an actor and writer, Bill Hader regards artists like Eddie Murphy, Monty Python, et cetera as his inspiration.

Who Is Bill Hader Wife?

Bill Hader went on to marry Maggie Carey in 2006 after dating for a short time. But unfortunately, they divorced after 12 years of marriage in 2018. They have three daughters from their relationship namely Hannah, Harper, and Hayley.

Hader began dating Rachel Bilson in the year 2019. They had met each other while they were working together in the movie The To-Do List. The couple announced the end of their relationship in 2020.

Hader likes to spend much of his time reading classics. His favorites include writers like Geroge Saunders, Junichiro Tanizaki, Fyodor Dostoevsky, et cetera.

Although Bill is pretty good-looking and capable of handling some good relationships, he has hardly been in any at this point in time. The talented actor is more focused on his career and loves to keep his personal life under the wraps with ease. Hader is more about his work rather than his love interest at this point.

Bill Hader has a long list of awards in his career. He has won around 22 awards and has been nominated for 60. Bill Hader’s first major award was a Primetime Emmy Award for his work in South Park.

Why is Spiderman Overhyped? Spiderman: No Way Home is a mess ? >>>

He has received two more Primetime Emmy Awards for his work in tv-series Barry. Hader has been nominated twice for Golden Globe Award but failed to win any of them.

Bill Hader has an estimated net worth of around $12 million as of writing. Although Bill Hader has made some investment in real estate most of his wealth comes from his work as an actor.

He bought a $3.05 million property in Pacific palisades in 2014 together with his then-wife. He has also made a good amount of wealth working as a producer in many tv-series.

Although the actor has talked about the real estate investment in the current world, there is hardly anything to know about the assets and also the cars held by the actor. With more movies and series to come his way surely, Hader will add up to the net worth account with ease.

Bill Hader is known for his talent along with his ability to connect with the audience. However, what is more, likable about the man is that he finds the time for the fans. As a result that Bill is available in the Instagram accounts. Readers can follow the actor on:

Bill Hader wasn’t in the office as a recurring character. But he did make an appearance in the finale episode along with other celebrities like Seth Meyers.

Bill Hader is quite rich as he has an estimated net worth of around $12 million. He also owns multiple real estate properties.

Bill Hader has worked as an actor. He directed five episodes of tv-series Barry between 2018 and 2019. Hader also worked as the director as well as a voice actor for the tv-series.