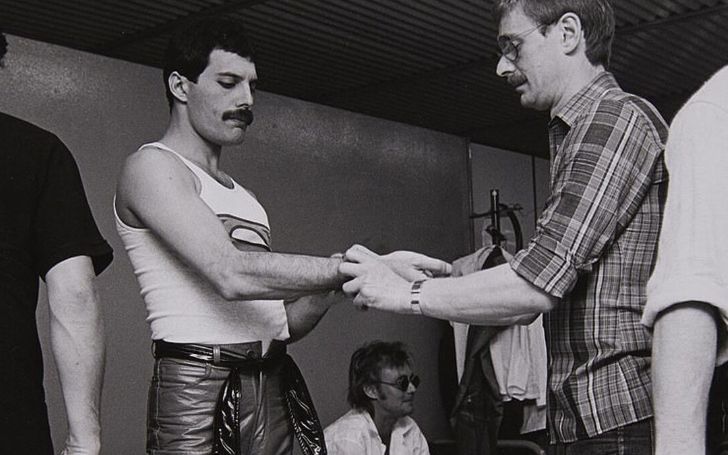 Hollywood is famous for making blockbuster movies. While some are adapted from different books or novels, several are based on inspiring people. Whether biopics or fiction from a novel, films always alter the story, scene, or dialogue. Paul Prenter is one interesting character in the music world.

It might not affect much if the book inspires the movie; what about the person? Bohemian Rhapsody is a movie based on the autobiography of the Queen lead singer Freddie Mercury.

There is no denying that the film interpreted Mercury’s life beautifully. To spice things up, his manager Paul Prenter appeared as a villain in their career.

The movie reflected petty details on the group’s character but failed to contemplate Paul’s character. His family was disappointed in the Oscar-winning film after Prenter’s behavior was fake, and along with him, his family also had a bad portrayal.

Here in this article, we will disclose Paul’s reality and compare some bits of the movie. We will also reveal why he did some bad activities to dirty the name of Freddie Mercury. Let’s take a sneak peek at some quick facts

How Did Freddie Mercury and Paul Meet? How Did He Betray Him?

Paul and Freddie are good friends who know each other professionally and personally. According to some resources, they met for the first time at the bar in 1975.

They became good friends in a matter of time, and a couple of years later, Mercury hired him as a manager. They used to work and party together.

Things did not go well for Freddie when Paul did an interview where he disclosed his deepest darkest secret to the media. He claimed that Freddie used to sleep with hundreds of men, and two of his friends died because of Aids.

In 1986 his friend Tony Baston from Brighton and John Murphy, an airline steward, died of AIDS. Mercury was very afraid that he would share the same fate.

Paul said that he would rather see him walk on water than see with a random woman. Also, Freddie stopped his wildlife after his friends started dying.

Furthermore, Prenter disclosed that Mercury was homosexual, and his first relationship was when he was 14 years old. Additionally, Paul elaborated that Freddie got into a homosexual relationship when studying in one of the boarding schools in India.

He also said that Mercury was accompanied by a different man every night. He used to go to bed at 6 am or 7 am but rarely alone.

Furthermore, Paul unfolded the truth that Freddie was scared to sleep alone. Upon hearing this, the Queen’s lead singer felt betrayed and later learned that his manager was paid about £32,000 for the story.

The news covered the three pages in The Sun paper. Moreover, Paul had also sold some photographs of Freddie with his lovers.

On page two, there was a whole column dedicated to the men he had been with. Later, Paul tried to explain his side of the story, but he never talked with him from that moment on.

According to Freddie’s partner Jim Hutton, Paul explained that the press was following him for many weeks and cracked under pressure.

Were Paul and Freddie Dating Each other?- Sexuality

It appeared that Paul was in a sexual relationship with Freddie. Also, he used to blackmail the singer as he was not out of the closet during that time.

Additionally, the Prenter family said they were not in any romantic relationship. As a matter, they even visited gay clubs together as they were queens.

Despite going together, they used to chase after masculine men. Also, their type was very different, and we’re not into each other.

They used to go to parties and spend so much time with each other that the Queen members resented their friendship. His brother also claimed that Paul and Freddie gossiped about the band and talked about men but were not lovers.

Who Is Freddie Mercury?

Born to rule the music industry, Freddie Mercury was a singer, songwriter, record producer, and lead vocalist of the Queen band. He was born in the year of 1946 on the 5th day of September.

The singer is famous for his song such as I Want to Break Free, Radio Ga Ga; Another One Bites the Dust, Bohemian Rhapsody, Killer Queen, The Game, Don’t Stop Me Now, to mention some.

His real name is Farrokh Bulsara and was born to his father Bomi Bulsara and his mother Jer Bulsara. He is blessed to have a younger sister Kashmira.

His famous singer stands tall at a height of 5 feet 9 inches which converts to 177 cm. May might not know this, but he is an Indian and comes of Gujrati Parsi descent.

The most distinct feature of this singer is his thick black mustache and white vest. He made a debut in 1985 named Mr. Bad Guy. His favorite color is Yellow.

Freddie’s favorite female actor is Liza Minnelli. Added to that, he loves movies imitations of life, Some Like It Hot and The Women.

In addition to this, he is a stamp collector, and two decad after his death, his stamp collection was displayed by his estate.

Apart from these, fans are not well aware that Mercury loves cats. He has even dedicated a song, Bad Guys, to his beloved pets. In 1996, the 10 feet tall mercury statue was seen in the Swiss City, Montreux.

When Was Paul Prenter Born? Who Are His Parents?

This hunk man was born in 1946 in London, England, United Kingdom. Talking about his parents, there is not much information about them; however, Paul was blessed to have a brother named Stephen Gerard.

It appears that his parents loved him very much and were by his side, supporting him on his last breath. Talking about education, there is not much in the media. Moreover, Paul is a British man who comes from white ethnicity.

Paul Prenter was a radio presenter in the start who met Freddie during a party. He was a very charming personality who had the skills to manage and manipulate people.

His height reads at 5’10” with the grace of the grin that always remains on his face. Meanwhile, his weight is also 60 kgs, which shows that he cares about his body well.

Even though there is proper information on the height and weight, anything about the shoe and dress size is tough to find. Meanwhile, the talented manager had a glaring personality and heart-winning relationships with almost every in the music industry.

The shiny blue eyes and flawless blonde hair meant he was a complete package of professionalism and good looks.

This was one of the biggest queries that every fan of modern-day music asked once in a while. Under the management of Paul Prenter, Queen and especially Freddie Mercury grew big times.

But all of a sudden, the talented singer decided to fire his manager. Sources later suggested that the real reason for firing him was that Paul was accused of sharing his personal life information with Freddie to the local newspaper.

Sources further add that Paul shared everything relating to how Freddie spends his daily life and slept with 100 men. Things blew out of proportion when the manager said that two of his earlier boyfriends of Freddie died due to AIDS.

This revelation was not positively received by Mercury, due to which Prenter had to lose the job.

What Happened to Paul Prenter?

Well, this is an interesting side of the story. After Freddie fired Paul for sharing his personal information with the press, things didn’t go too well for the manager.

From the money he received from sharing the information and images of Freddie, Prenter went to Belfast. There the manager spends all of his money. After spending some time in Belfast and losing all the money, he returned.

Upon arrival at periphery of Freddie, Paul asked for money from the singer, with which Freddie didn’t drop out a single penny. With least hope, Paul returned to Belfast, where he died of AIDS.

How Did Paul Prenter Die?

Paul’s death was similar to the lead singer of the Queen in one way or another. As a matter of fact, he passed away three months before Mercury died. Just like the singer, he also had AIDS.

Paul said that he tested HIV positive and had AIDs. He also said he wanted his fans and friends to know that he would be no more soon.

Furthermore, Prenter did not share it in the media because he wanted to maintain privacy. At the time of his death, he was very poor, and his parents took all the care in the world.

Who Portrayed the Role of Paul in Bohemian Rhapsody?

In the famous biopic of Freddie Mercury, Allen Leech was seen portraying the role of Paul. Along with actor Rami Malek was seen as Freddie Mercury while Gwilym Lee portrayed the character of Brian May.

Meanwhile, the role of John Deacon and Roger Taylor was played by Joseph Mazzello and Ben Hardy. Similarly, Lucy Boynton was seen as Mary Austin, and Aaron McCusker played the role of Jum Hutton.

What Did Paul Prenter’s Family Think of the Movie? -Movie VS Reality

As soon as Bohemian Rhapsody was released, Paul’s family and friends were displeased by how he was portrayed in the movie. His brother said it was a cowardly move to make him look bad to make the protagonist stand out.

The family also claimed that Freddie would have been dissatisfied if he had seen the movie. In the movie, Paul’s parents were homophobic, but in reality, they knew about Paul’s sexuality when he was just 16 years old.

He had even brought men in his house to stay at their place in Dublin. However, Freddie had an issue with Prenter being gay.

On the one hand, Paul was very open about his sexuality, whereas Mercury never admitted that he was gay, although everybody in the room knew about it. Also, his parents were hurt when the movie fabricated not only Paul’s character but theirs.

They also confessed that they buried Prenter after he died of AIDS. Similarly, Paul was compelled to disclose the private information of Freddie was he did not have any money.

After serving the band for a decade, Prenter did not receive much wealth, unlike the band members. Later he was diagnosed with AIDS, and he did not have enough finance to regulate his health check-up.

Unlike what Bohemian Rhapsody shows, he never gave an interview in the media regarding Freddie. Also, Mercury fired him after the Live Aids event in 1986, not before the event.

What Was The Net Worth of Paul Prenter?

Although Paul was the manager of the legendary rock band Queen, he did not earn much. He served for the band from 1977 to 1986 until Freddie fired him.

At the time of his demise, he had a net worth of $2.5 million. It was also revealed that Paul was very poor on his death bed. As he had AIDS, he did not have money to check his health.

However, during the worst situation in his life, his parents helped him greatly and were by his side.

When Paul died at 45 in 1986, there was no computer or internet. Therefore we assure you that Prenter is not active on any social media platforms.

If there are any social media accounts of the man present, it is mainly due to the fan’s love.

Yes, the manager of Freddie Mercury is named Paul Prenter.