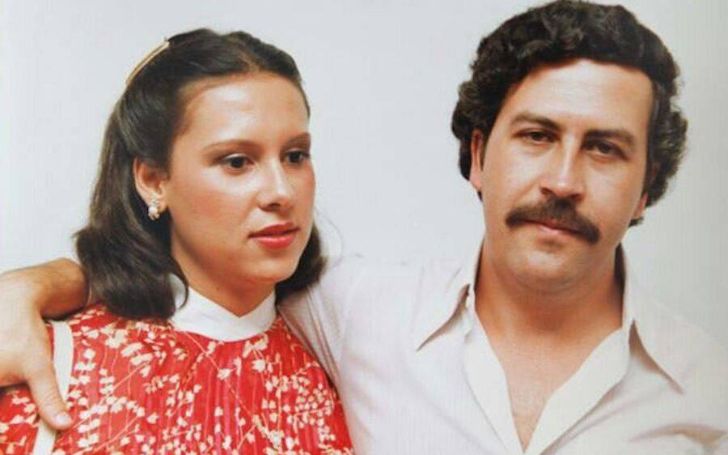 To the whole world, Pablo Escobar was a cold-hearted murderer, but to his wife, he was the love of his life, and for his kid, he was someone who fulfilled their wish in the blink of an eye. His wife Maria Victoria Henao became a center of attraction and talk of the town after his demise. The victim’s family asked her how she can live with that monster? Why did she not turned him in? Or How can you sleep with him?

These are some questions thoroughly asked in the interview, but she has repeatedly confessed that she had little to no knowledge of what was going on in Escobar’s business.

This lady was only 15 years old when she tied a knot with The King of Cocaine Pablo. She was sadly widowed at the tender age of 32. Many might say vicious things about Pablo, but Maria knows that he made her feel like a princess and treated her with respect.

This article will let you know how this couple’s relationship flourishes throughout the years and where is all the black money Escobar collected from his business. Before all this, let us know about Maria through some quick facts.

Who Are Maria Victoria Henao Parents?

This string woman was born in the beautiful place of Columbia. She was raised in Palmira Valle Del Cauca. This beauty was blessed to have sister Pastora Henao Bayen and brother Carlos Mario Henao Vallejo by her side.

How Old Is Maria Victoria Henao? Is She Alive?

Pablo Escobar’s wife was born in the year of 1961 and is 60 years old in 2021. After the demise of Pablo, it was very tough for Victoria to take care of the kids and run away. However, she survived all the obstacles in her life, and she is in good health.

When Did Maria Victoria Henao and Pablo Escobar Meet?

When Did Maria Victoria Henao and Pablo Escobar Meet?

Maria fell for Pablo at a very young age; he used to roam around her house in Vespa, and from that moment on, she was enchanted by him. During that time, she was just 12 years old, while Escobar was 23. For her, he was the first and only love of her life. At the start of their love, Pablo used to do everything for her.

He used to gift her expensive gifts and once even gifted a yellow bicycle. She said that he made her feel like a fairy princess, and he was her prince charming.

It was like a fairy tale until they kissed for the first time. Later of Maria got pregnant at the age of 14, and she was unaware of the fact. She was young and inexperienced, but he took her to an abortion clinic.

The doctors lied to her about the procedure and said that they were trying to stop future pregnancies. She still recalls the unbearable pain Maria went through that day.

During the operation, she prayed the god that it would be over soon. Despite all this trauma and experience, Maria agreed to walk down the aisle.

In addition, her parents did not agree to their love affair as Henao was young while Pablo was ten years older than her. Therefore they decided to elope and walked down the aisle in 1976.

What Was It Like To Marry The King of Cocaine?

When this lovey-dovey couple got married, Pablo initiated his business from small crimes to bugs. He was starting to build the drug empire. Soon enough, he exported 80% of all the cocaine in the United States as the kingpin of the Medellin Cartel. Although Pablo’s crime was escalating, her wife stood by him silently.

Maria said that Pablo manipulated her to be his wife and mother of his children. She was not allowed to ask questions and challenged his choice or work.

Henceforth Henao looked the other way. At the beginning of their marriage, Escobar did no reveal what he did for a living. Eventually, she realized where all this huge sum of money came from as he was away from home most often.

Despite all this, Maria looked the other way and enjoyed her husband’s fortune. In the eye of the public, Maria was wealthy and had a normal life.

She used to go to fashion shows in private jest and enjoyed famous artwork. However, inside, she was troubled by Pablo’s heinous crime.

More importantly, her husband’s external affair tortured him the most. It was no surprise that Pablo was involved with several women. Even though they were married, once The King of Cacaine created a bachelor pad at their house, he brought his mistress under Maria’s nose. The gossip was going all over the place, and it was very painful for her.

After that, she no longer turned her head and became aware that her family was in danger. From that moment on, she lived with a fear that anyone could come and kill her family one by one.

In 1993 Pablo became a wanted man, and he knew that his days were numbered. To save his family, he promised Maria to secure her and the children under government protection.

Henao still recalls that day when she had to leave the love of her life when the whole wide world was coming crashing down on him.

In December of 1993, Pablo was encountered on a rooftop in Medellin. The Columbian police gunned him down, and the world was celebrating the demise of the greatest drug trafficker of history.

As soon as the news of his death swirls, his family was the most insecure one in the country. Maria tried to take asylum in Germany and Mozambique, but they denied it, and the whole family moved to settle in Buenos Aires, Argentina.

Henao changed her name to Victoria Henao Vallejos or Maria Isabel Santos Caballero or Victoria Eugenia Henao. Even though they were away from all those chaos, things were not better for her family.

She and her son Juan was arrested on suspicion of money laundering and stayed in prison for several months. After their release, they became underground for nearly two decades.

What Is The Net Worth of Pablo Escobar? Where Did All The Money Go?

Pablo built an empire out of nothing. This drug kingpin’s net worth peaked at $30 billion in his lifetime. As a matter of fact, he was one of the wealthiest drug dealers in history. Unfortunately, after his death, his family could not claim his earning.

Furthermore, all of their property, wealth were taken, and Maria was left with nothing. She built herself from scratch and earned some money to take care of her kids. After some time, Henao released a book titled Mrs. Escobar: My Life with Pablo in 2019.