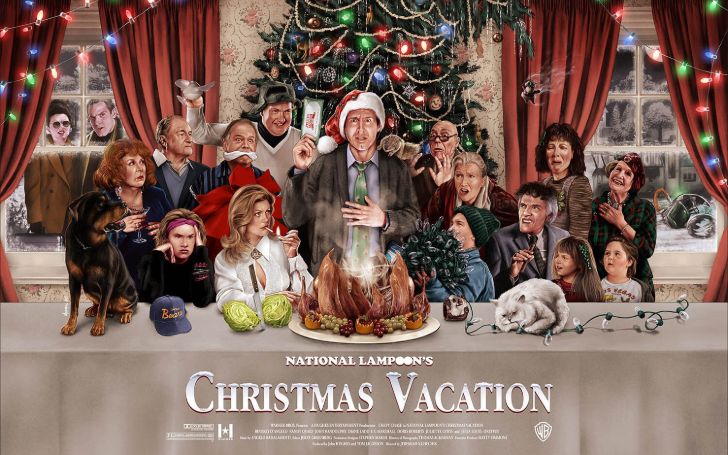 Movie Christmas Vacation is an American Christmas comedy film released in 1989. It is also the third entry in the Vacation film series from National Lampoon magazine.

The film was inspired by writer John Hughes‘ short tale “Christmas ’59,” which appeared in the December 1980 edition of National Lampoon magazine.

The film premiered at No. 2 at the box office, trailing only Back to the Future Part II. The film finally topped the box office rankings in its third week and remained top the following weekend. Until the release of Vacation in 2015, it was the highest-grossing film in the series.

It’s Christmas time, and the Griswolds are preparing for a family holiday gathering, but things never go as planned for Clark, his wife Ellen, and their two children.

His annoying family guests exacerbate Clark’s terrible luck, but he perseveres since his Christmas bonus is due shortly.

Chevy Chase plays the character of Clark W. “Sparky” Griswold Jr., The Griswold family is very patriarch. He is continuously cheerful and occasionally delusory, yet he is enthusiastic about and devoted to the ultimate family vacation.

Cornelius Crane Chase is Chevy Chase’s full name. He is an accomplished American comedian, writer, and actor. Chase worked in several fields before settling into comedy and beginning his career with National Lampoon.

He was a significant cast member of Saturday Night Live’s inaugural season. Actor Chase got three Primetime Emmy Awards out of five nominations as both a performer and a writer.

Actor Chase made his feature film debut with the Foul comedy Play (1978), for which he received two Golden Globe nods. From 2009 to 2014, Chase portrayed Pierce Hawthorne in the NBC comedy series Community.

In addition, he appeared in five National Lampoon’s Vacation films and as Irwin “Fletch” Fletcher in Fletch (1985) and its sequel Fletch Lives (1989). Caddyshack (1980), Man of the House (1995), and Hot Tub Time Machine are a few other notable titles.

Chevy Chase has a net worth of $50 million as of 2021. He made his riches through appearing in films and television shows.

Beverly D’Angelo plays the character of Ellen Griswold, Clark’s wife. She may not share her husband’s perspective, but she still supports him in his Christmas attempt.

Beverly Heather D’Angelo is an American actress best known for Ellen Griswold in the National Lampoon’s Vacation series from 1983 to 2015.

She has appeared in 60 films throughout her four-decade career and was nominated for a Golden Globe Award. Her most well-known films were Coal Miner’s Daughter (1980) and A Streetcar Named Desire (1983). D’Angelo’s other film appearances include Sheila Franklin in Hair (1979) and Doris Vinyard in American History X (1998).

Christmas Vacation is one of those everlasting favorites that you can rewatch over and over because it’s simply too much fun not to. Everything that might go wrong in this picture does, and it takes place at Christmas, so it makes your holiday a little less tense.

A fantastic real classic film! It’s one of the best of all time! My favorite moment is when Clark gets angry at the other person for destroying his Christmas tree.

The most amusing section of the film! When he says, “My tree!” This joins the ranks of the previous National Lampoon’s Vacation flicks! Not to mention the original! Five stars from start to finish!

The narrative revolves around a man who tries to take on everything to have a wonderful family Christmas but begins to lose his cool as the day’s countdown begins to Christmas.

The Witcher Season 2 release date, Episodes, Cast, What to Expect >>

This is by far my favorite of the Lampoon Vacations to watch over the holidays. I’d give this movie a 4 out of 5 stars because of how effectively the narrative is executed, the humor is on par, and Chevy Chase’s overall emotions make it appear as if he’s losing his mind.

“I’m sorry, this is our family’s first kidnapping.” Ellen Griswold

“What is it? A letter confirming your reservation at the nuthouse?” Grandpa Art

“If that thing had nine lives, she just spent ‘me all.”: Cousin Eddie

“I don’t know what to say, but it’s Christmas, and we’re all in misery.” Ellen Griswold

“You couldn’t hear a dump truck driving through a nitroglycerin plant.” Uncle Lewis