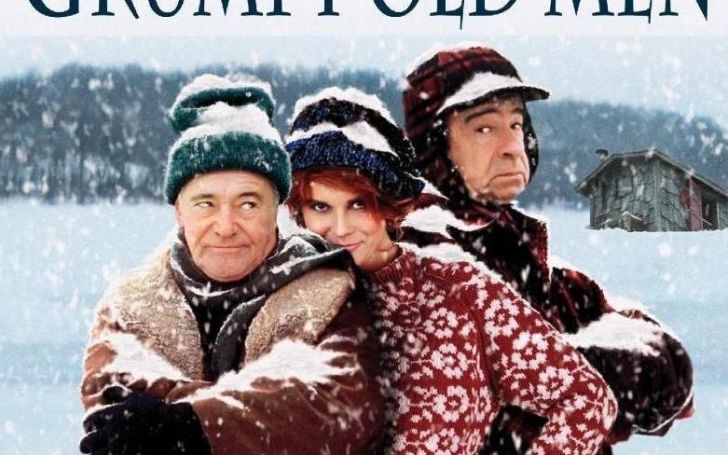 Grumpier Old Men, a sequel, was published in 1995, with Lemmon, Matthau, Meredith, and Ann-Margret returning their roles and Mark Steven Johnson penning the script.

Next-door neighbors John Gustafson and Max Goldman are always fighting. They spend their time alone ice fishing and playing terrible practical pranks on one other.

Both John and Max are drawn to Ariel Truax, a free-spirited English professor who moves in across the street. When both characters fall in love with her, the competition heats up even more.

Grumpy Old Men Cast was full of great actors. The major actors of the movie were :

Jack Lemmon portrayed John Gustafson Jr. He was a brilliant actor who played significant parts from the 1960s through the 1980s.

Likewise, his most notable roles were in drama and comedy films. In comedy and drama films, this actor was noted for his neurotic, middle-class everyman screen image.

His brilliance has been recognized by the nominations and prizes he received during his career. Similarly, Actor Jack was nominated for an Academy Award eight times, winning twice, and received several other honors, including six Golden Globes.

He received the American Film Institute’s Lifetime Achievement Award in 1988 for his contributions to American cinema.

Lemmon has two marriages. His first marriage, actress Cynthia Stone, with whom he had a son, Chris Lemmon (born 1954), split due to incompatibility. On August 17, 1962, while filming Irma La Douce in Paris, he married his second wife, Felicia Farr. Courtney, the couple’s daughter, was born in 1966.

Matthau won two British Academy Film Awards as well as a Golden Globe Award. In 1963, he won a Primetime Emmy Award for his role in The DuPont Show of the Week. Actor Walter was honored with a star on the Hollywood Walk of Fame in 1982.

Matthau was married twice: once to Grace Geraldine Johnson from 1948 until 1958. Later he was married to Carol Marcus from 1959 until he died in 2000.

He has two children with his first wife, Jenny, David, and a son with his second wife, Charlie Matthau. Matthau also assisted in the upbringing of his stepchildren, Aram and Lucy Saroyan.

Ann-Margret Olsson portrayed the character of Ariel Truax. Singer Olsson is popularly referred to as Ann-Margret. She is an accomplished Swedish-American actress, singer, and dancer.

She has received five Golden Globe awards in her career. Likewise, She has been nominated for two Academy Awards, two Grammy Awards, a Screen Actors Guild Award, and six Emmy Awards.

Her career as a singer and actress spans six decades. She was dubbed the “Female Elvis Presley.” Her contralto voice is seductive and energetic.

Her birthday is April 28, 1941. Actress Ann-Margret is 80 years old as of 2021. Ann-Margret was married to Roger Smith in 1967. She has no children. However, she was the stepmother to her husband Roger Smith’s three children.

She married Smith on May 8, 1967, and he died on June 4, 2017. In addition, She previously dated Eddie Fisher and was romantically linked to Elvis Presley while filming Viva Las Vegas in 1964.

I’d watch it again if it came on TV since it’s such a terrific movie, and the two protagonists have been friends since they were kids. Even though they are both cranky elderly men in the film, they are both grumpy old men to each other.

Likewise, it is a wonderful movie without all the cussing we normally hear in today’s movies, which is a welcome change. The chemistry between Lemmon and Matthau is wonderful and hilarious.

They’re both fantastic performers, and they develop a film in which they begin as rivals and eventually become friends near the end. This film contains a significant theme: always remain with your friends, especially when they are in trouble.

“-Last Thursday, I turned 95 years old. And I never exercised a day in my life. Every morning, I wake up, and I smoke a cigarette. And then I eat five strips of bacon. And for lunch, I eat a bacon sandwich. –Grandpa Gustafson

“There is much fish in the sea, but you’re the only one I’d want to stuff and mount over my fireplace.” –Max Goldman

“How about you come back to my place, and I’ll show you my man-size cannelloni?” –Grandpa Gustafson

“I just met a girl named Maria, and suddenly I see she’s not the… bitch I thought she would be.” –Max Goldman

“You know what Jacob said. Jacob said that old Billy Henchel was killed in a car crash. Head-on collision with a freight truck. Cleared his car straight over the bridge into the Mississippi.”.” –Max Goldman

“Did you hear someone moved into the old Klickner place? A woman.” –John Gustafson