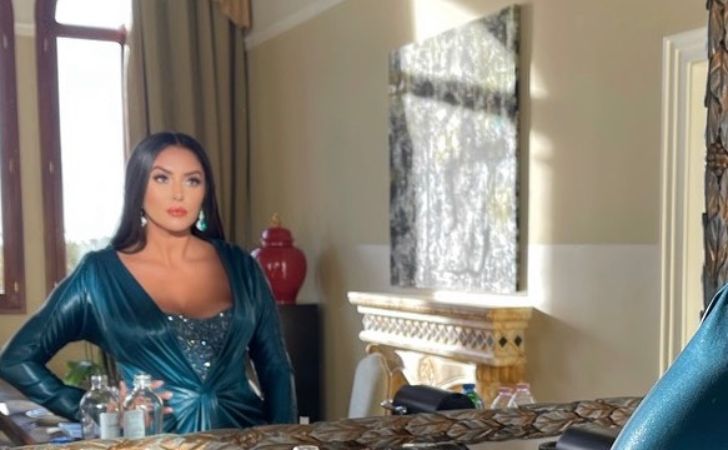 Vanessa Laine Bryant is a former model from the United States who is now a philanthropist. Model Bryant is primarily known for her marriage to Kobe Bryant.

Bryant has been in various music videos for musicians such as Tyrese, Ludacris, Pharrell, and Snoop Dogg. Vanessa and Kobe’s relationship was filled with ups and downs, and the pair filed for divorce in 2011.

However, they reversed their decision in 2013. After her husband’s death, she cares for her four children and engages in philanthropy.

Bryant was born in the California town of Huntington Beach. Vanessa Cornejo Urbieta is her given name. Stephen Laine is her stepfather’s name, and Sophia Laine is her mother’s.

When she was a youngster, her biological father, and mother, Sophia split; she even used her birth father’s surname Cornejo as a youngster. Her mother reared her and her older sister Sophie despite their family’s financial difficulties.

She is of Mexican, Irish, English, and German ancestry. Vanessa Bryant attended St. Boniface Parochial School in 1996 and was a varsity cheerleader before moving to Marina High School.

Model Vanessa graduated with honors in 2000 and married Kobe Bryant shortly after.

What is Vanessa Laine Bryant ethnicity?

Vanessa is of mixed ethnicity despite being born in Los Angeles, California, USA. She has Mexican, Irish, English, and German ethnicity. Her biological father is Mexican, while her mother is Irish-English.

Her sign indicates that she is dynamic, career-oriented, and enjoys being among like-minded individuals.

As a model, Vanessa stands 5 feet 5 inches tall, or 165 cm. This young model is a fitness fanatic who strives to look decent in front of the camera.

That might be why she goes to the gym more frequently than not. As a result, Vanessa’s body weight is 55 kg, which converts to 121 pounds.

Kobe Bryant and Vanessa Bryant were regarded as among the most attractive couples globally, not only in the NBA. Everyone was in awe of their lovely relationship.

In November 1999, the two fell in love. At the time, Kobe was 21 years old, and Vanessa was 17 years old. Vanessa worked as a background dancer in Tha Eastsidaz’s song video “G’d up.”

When Kobe saw her first time, they started dating in May 2000 and were engaged six months later. At the time, Vanessa was a senior at Marina High School in Huntington Beach, California.

She finished high school through a home school program. On April 18, 2001, they married at St. Edward Roman Catholic Church in Dana Point, California.

Bryant’s parents reportedly objected to him marrying so young, especially to a not African-American lady. But we all know parents can’t stay furious with their children for long. Bryant’s first daughter brought an end to their feud.

After a short period of dating, Vanessa married Kobe Bryant. On April 18, 2001, she was just 18 years old when she married Kobe. Natalia Diamante, their daughter, was born in 2003.

Gianna Maria-Onore was born on May 1, 2006. Model Vanessa filed for divorce on December 16, 2011, alleging irreconcilable differences, and the pair wanted shared custody of their kids.

Vanessa Bryant met Kobe Bryant, pursuing a side career in music at the time while working as a backup dancer in a music video for the hip-hop group Tha Eastsidaz.

Model Vanessa Bryant’s personality developed over time after her marriage to Kobe Bryant. She embodied the ideal sports star wife, attending games and accompanying her husband to social functions.

She became less interested in her modeling profession after her marriage. Vanessa appeared in many news articles and popular front-page magazines with her husband, Kobe.

After the passage of more than a year, Vanessa Bryant is still coming to grips with the death of her husband, Kobe, and her 13-year-old daughter Gianna.

A few months after their deaths, it was found that pro-athletes had been directly messaging Bryant on Instagram, inviting her out on dates. According to the sources, she is not presently dating anyone despite having some friends that can support her emotionally.

Vanessa Laine Bryant’s net worth is $600 million in 2022. Only a few people have such a significant net worth. On the other hand, Vanessa has had to go through a lot to get such a high net worth.

Vanessa acquired the whole wealth after Kobe died. As a result, her net worth has risen. Vanessa’s earnings are also derived from her appearances in various music videos by well-known artists.

She also received a $200 million inheritance from Kobe’s business BodyArmor. She has also developed her brand, Mamacita, in collaboration with Dannii.

No one can comprehend how she felt after losing her husband and one of her kids on the same day. It may be larger than any financial advantage she may have received.

How did Vanessa Bryant know about Kobe’s Death?

Vanessa Bryant learned about Kobe and her daughter’s deaths over the internet. She remembered getting RIP Kobe alerts on her phone.

Vanessa Bryant, a model, said a family assistant notified her that her husband and daughter were in a helicopter crash, but five people survived. They were most certainly among the surviving, she reasoned.

She also filed a negligence and invasion of privacy lawsuit against the Los Angeles County Sheriff’s Department. Officers allegedly shared gruesome images of the accident scene with her, including Kobe and Gianna’s bodies.

After the demise of famous basketball player Kobe and their daughter, Vanessa found herself in domestic drama. Surprisingly her mother, Sofia Laine, claimed that she should pay $5 million back to her.

According to her, she took care of their daughter as a longtime personal assistant and nanny. Similarly, the player had promised to take care of her financially indefinitely.

Unfortunately, the player is o longer in this world to fulfill his word. However, his wife was not just ready to take the step to keep her late husband’s words.

In contrast, Laine’s legal action 11 months after the player’s demise created a huge backlash from the people. One journalist also said that the lawsuit was repulsive.

The strongest response to this comes from Vanesa herself. She claimed that her mother said she was the kids’ nanny or assistant.

In fact, she accused her mother of extorting her financial windfall. She said, “This lawsuit is frivolous, disgraceful, and unimaginably hurtful.”

This model has maintained a high degree of fame after her marriage to Kobe Bryant. This young lady has a large number of followers. It’s because of her fantastic job and stunning profile.

As a matter of fact, Vanessa is a Latina of Mexican German, Irish and English ancestry.

Back in 2003, the model accused her husband of sexually assaulting a 19 years old Colorado hotel employee. Although he denied the accusations, he confessed that he was not faithful to his wife.

Vanessa is American by nationality as she was born in Los Angeles, California, USA.