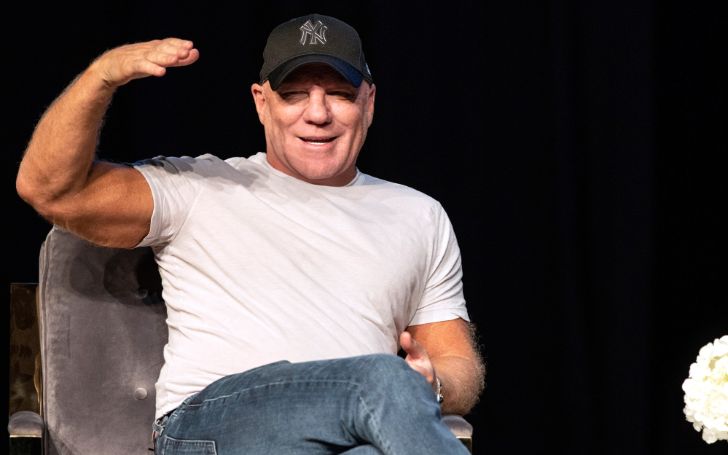 There is rarely any celebrity who has established themselves as a fashion designer as well as a businessman. Although both of the professions come hand in hand, only a few can master it.

Among the few is Steve Madden, who is profoundly known as an impeccable fashion designer and a businessman. Not to mention his founder of the shoe company Steve Madden Ltd.

As a matter of fact, he launched his business with just an amount of $1,100 in 1990 and later built an empire from it. Surprisingly, nowadays, this company makes about $1.5 billion in revenue per year.

There is no denying that Steve is one of the highest-paid executives in America. But, more interestingly, he was once featured in the famous movie The Wolf of Wall Street.

Today, through the article, we will be revealing each and everything about this handsome in detail. The discussion will include how he was able to create an empire out of nothing. Along with that, we will briefly talk about his age, height, body, and more. Let’s get to know Madden better through some quick facts;

Who Is Steve Madden?- Parents, Siblings, Childhood, and Education

This honorary man was born and raised in the Rockaway, Queen. He was brought by an Irish Catholic father and a Jewish mother. According to sources, he is the youngest member of the family.

Steve was blessed to have a supporting parent who loved him with all their heart. Similarly, he had two brothers who protected him like a shadow all his life.

Talking about education, this man has been at the local high school located in Nassau County, New York. As soon as he accomplished his education, Madden went to the University of Miami.

During his time there, Madden worked hard for a couple of years to build himself. Eventually, Steve decided to start his own company in 1990. Although he did not have any money, Steve invested around $1,100 and sold shoes out of the trunk of his career.

How Old Is Steve Madden?- How Tall is He?

This dandy designer was born in the year of 1958 and is 63 years old in 2021. Steve celebrates his birthday each year on the 23rd day of March.

Therefore Steve falls under the sun sign of Aries. According to this sign, he is hard-working, diligent, and a passionate human being.

In addition to this, Steve used to have short black hair, but his hair color has changed to salt and pepper due to his old age. Added to that, he is blessed to have shiny ocean blue eyes.

One thing that his fan notices all the time is the cap that he never misses wearing. He often changes his cap color from white, black, red to blue.

Why Did Steve Madden Go To Prison?

This footwear fashionista was convict for stock frauding and was sentenced to 41 months in prison. According to Steve, his stupidity, greed, and arrogance led him to do so.

The former CEO helped the penny stock firms Monroe Parker Securities and Stratton Oakmont Inc manipulate the initial public offering and his own company’s stock. Henceforth this man could not designer more shoes due to his time in prison.

As a matter of fact, the judge asked Mr. Madden to pay a fine of $80,000 with restitution of $3.1 million. According to resources, the annual sales of the company were already $250 million.

However, in January, the company purchased a loss mitigation policy of $6.95 million to cover the legal costs that arose from Steve’s June 2000 indictment. Not to mention the stock manipulation scheme costed the investors of the company about $100 million.

In addition to this, Steve had agreed to pay around $1.8 million to settle his fraud and insider trading civil charges brought by the Securities and Exchange Commission.

Who Played The Role of Steve Martin in The Wolf of Wall Street?

The Wolf of Wall Street is a 2013 epic biographical black comedy crime film written by Terence Winter and directed by Martin Scorsese. The movie is adapted from the memoir of The Wolf of the Wall Street by Jordan Belfort.

In the movie, the role of Steve Madden role was portrayed by the famous Jake Hoffman. Steve was seen making a pep talk about pushing Steve’s stock. As soon as this man saw this movie, he said that his role was too nerdy.

Who Is The Wife of Steve Madden? Is He Single?

There are many celebrities who may flaunt their love life to the general mass. Some amuse us, while some intrigue us at best. Well, Steve’s love story tops them all.

This dandy man was head over heels for beautiful lady Wendy Ballew. As a matter of fact, they were high school friends and knew each other well from their college times.

Previously they did not have any lovey-dovey feelings for each other and used to date their people. Not to mention Wendy was also one of the first employees and a close friend.

Eventually, Steve was sent to prison, and everything went haywire. Soon after the business deals, Wendy used to visit him in a prison cell. Soon he developed feeling for her, and the next thing they knew, Madden proposed to this beauty in Federal Correctional complex Coleman in Ocala, Florida.

Surprisingly she said yes, and they started dating each other until 2005. This, the year Steve was released from prison, and both of them decided to walk down the aisle.

Does Steve Madden Have Any Kids? Who Are They?

The kids were born safe and sound in 2007. They named them Jack and Stevie. According to Steve, young Jack weighed about 6 pounds, 6 oz, during the time of birth, while Stevie was about 5 pounds and 8 oz.

Although they had two wonderful kids and prosperous life, they decided to end their marriage. Unfortunately, in 2015, they parted out for good. However, the reason for their parting is confidential.

What Is The Net Worth of Steve Madden?

It might be hard to believe that Steve makes a gigantic amount of money from his fashion designer and businessman work. With his shoe company named Steve Madden Ltd., one can easily imagine that his net worth doubles and sometimes triples.

In 2021, Madden’s net worth clicks around $300 million. Yet, surprisingly this businessman created his business for just about $1,100. Today, his company is successful in generating more than $1.5 billion in revenue per year.

In addition to this, his market cap in 2021 is $3.42 billion. Not to mention this man is one of the highest-paid executives in the United States of America. Back in 2012, he accumulated about $85 million, and in 2011, his stock value elevated to $80 million.

There is no denying that Steve makes an impeccable shoe design that attracts several people of diversified age groups. He has accumulated millions of followers and fans through his social media account.

It is the way to uplift his business and get in touch with his beloved fans. You can follow him on the link below;