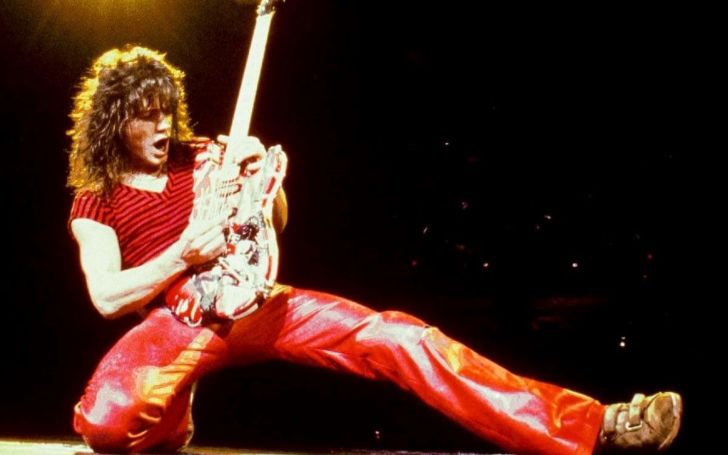 One of the famous rock bands, Van Halen‘s lead guitarists, is Eddie Van Halen. He has been ruling the music industry since his arrival and reached a new height. This guitarist has contributed his work and experience to uplift and modernize the course of music.

Eddie is renowned for chording in the super hit song such as Jump, Eruption, Dance the Night away, You Really Got Me, Hot for teacher, Unchained, Mean Street, Right Now, Panama, Drop Dead Legs, Atomic Punk, I’m the one, When It’s Love, Feel Your Love Tonight to name few.

Astonishingly this legendary singer died on October 6, 2020. Along with his family and friends, the whole music industry was mourning in grief. He was also regarded as the Mozart of our generation, but sadly he s no longer with us.

With that being said, we will reveal everything about this man who could soothe anyone’s heart with his chords. The discussion will include how he died, his age, wife, kids, and other legacies. Read the end of the article to get the thorough details about him. Before all this, let’s get started with some quick facts;

Who Is Eddie Van Halen?- Parents, Siblings, Childhood, and Education

This guitarist was born as Edward Lodewijik Van Halen in Amsterdam, The Netherlands. He was born to his father, Jan Van Halen, and mother, Eugenia. Not to mention his father was active as a Dutch pianist, saxophonist, clarinetist, and whatnot.

The Halen family used to reside in Nijmegan, Netherlands. However, in 1962 the family moved to the United States. He was the youngest child in the family as Eddie had an older brother Alex Van Halen.

Speaking of him, he is the one responsible for creating the Van Halen rock band in the first place. To be precise, Alex played drums in the band. Moving on, the Valen’s brother learned to play piano at the age of six. Similarly, they were tutored by Stasys Kalvaitis.

When Was Eddie Van Halen Born? How Tall Was He?

This handsome singer was born on the 26th day of January in 1955. Thus, he fell under the sun sign of Aquarius. Being in a rock band, Eddie used to stands tall at a height of 5 feet 8 inches which converted to 173 cm.

Similarly, Halen used to weigh about 70 kg which converts to 154.5 pounds. Added to this, Eddie used to carry the look of long hair and a slim body. He had luscious dark brown hair and a pair of blue eyes.

Although Eddie ended up being a great musician, he never read music. he often watched the recital of Mozart or Bach to improvise. In 1964 he competed in the annual piano competition of long Beach city College and won.

Surprisingly Eddie held the title for three long years until 1967. Since their childhood, Jan wanted to make his kid a classical pianist, but both brothers were inclined towards rock music instead.

Eddie was highly influenced by The Beatles and The Dave Clark Five at the beginning of his music learning phase. Later this man enrolled in the Hamilton Elementary School located in Pasadena. In the school, along with his brother, they formed a band named The Broken combs. Not to mention they were in fourth grade at that time.

Who Is The Wife of Van Halen? Does He Have Kids?

This Van Halen guitarist was head over heels for Valerie Bertinelli. They encountered each other backstage at a concert. During that time, the band had a continental rock n roll tour in history. As for Valerie, she was one of the high reputed actresses in Hollywood.

This lovey-dovey bond was impeccable. They used to end each other’s sentences and even knew what they were feeling or thinking without telling each other. In addition, Valerie used to support him with each and every tour.

While in relation, Bertinelli often thought that Eddie adored skinny women. In order to be his ideal choice, she did not use to eat. Things got out of hand, and this guitarist soon noticed. Therefore he used to take her to have a chili cheese dog and fries.

Eventually, he saved her from having an eating disorder. All this time, they had a healthy relation but unhealthy life. Finally, with a growing love for each other, they walked down the aisle on April 11, 1981. A decade after that, in 1991, the duo gave birth to Wolfgang Van Halen.

Although they became parents, it did not stop them from drinking and taking drugs. Slowly, their relationship turned sour. Eddie had undergone hip replacement at the age of 44 and was diagnosed with tongue cancer. Later he assured his wife that he would stop doing drugs.

Instead, Bertinelli found cocaine in his wallet and wanted to end things in 2001. Their marriage was finalized five years after that.

As soon as Eddie got separated from his first wife, things got tough for Eddie. Luckily in 2009, this man fell in love with another Hollywood stunt woman Janie Liszewski. Along with this, she also worked as his publicist.

They could not wait long to take their relationship to a whole new level. Fortunately, they tied a knot in the year 2009 a Studio City estate. The wedding was attended by his son, ex-wife, friends, and family.

How Did Eddie Van Halen Die? When Did He Die?

The world was in grief when the news of this stunning guitarist’s death was all over the internet. Eddie’s death was confirmed on the 6th day of October at the age of 65 in 2020. Sources suggested that he was battling cancer.

Surprisingly Eddie suffered from alcoholism and drug abuse from the age of 12. The major cause of his demise is listed to be a cerebrovascular accident or maybe a stroke.

Other than this, several other causes, such a bone marrow disorder, pneumonia, myelodysplastic syndrome, skin cancer on the head neck, lung cancer, were seen. The doctor gave him six weeks to live in 2017, but Eddie went to Germany searching for treatment.

Luckily he lives for three more years. Van Halen’s body was cremated after 22 days of his demise. Surprisingly, his son revealed that the Van Halen band would not continue as “You can not have Van Halen without Eddie Van Halen.”