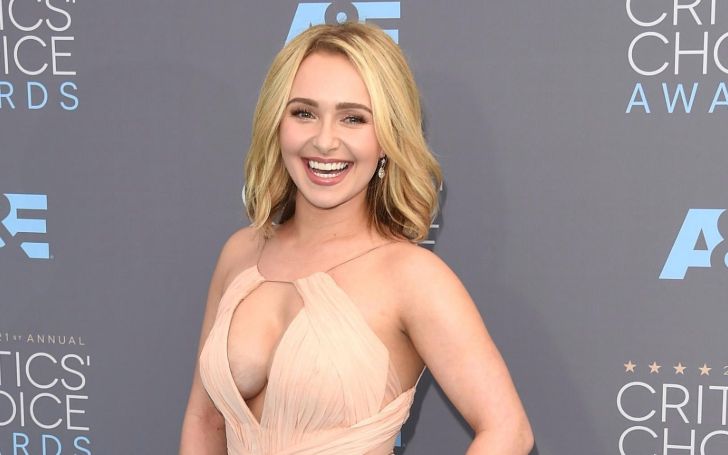 Hayden Panettiere is a beautiful American actress and singer. The actress has also done substantial modeling work before establishing herself as an actor.

Her work has helped her gain international fame, particularly from her movies. This actress started acting professionally from a young age. She has extensively worked as a child actor and was no stranger to show business as an adult.

Hayden Panettiere has been able to create a linear progression in her success as an actor. She is one of the most successful child actors who has been working consistently, even as an adult.

Panettiere has also proved herself in other forms of art. She has released several songs which have gone on to bless the ears of her audience.

She released her first single in early 2008 and has since released many songs that have made it to the charts.

Born on the 21st of August in 1989, Hayden’s age is 33 years as of 2022. She first appeared in a commercial on television when she was just eleven months old.

She soon began acting as a child actor from a young age. Hayden received home tutors in her later years of high school to work in movies.

She takes exceptional care of her health as she likes to remain fit and healthy for her work and happiness.

Talking about her physique, Hayden Panettiere stands at a height of 5 ft and 3 inches and weighs around 145 pounds. This beautiful actress has green-colored eyes and blonde hair.

Hayden Panettiere was born in New York to Lesley R Vogel and Alan Lee Panettiere. Her mother was an actress who worked in soap operas.

Her father worked in the Fire Department of New York City. She carried in the footsteps of her mother towards becoming an actor. She also has a brother named Jansen Panettiere, who works as an actor.

Hayden Panettiere’s first known public relationship was with one of her co-actor, Milo Ventimiglia. She dated him from 2007 to 2009. She then started dating Wladmir Klitschko.

He is a former heavyweight boxing champion. She was often seen attending Wladimir’s matches after they started dating in 2009. In 2013, Panettiere said that she was getting engaged to Klitschko.

Hayden became a mother to a daughter from the relationship. In mid-2018, she announced that she had broken up with Wladimir, but the reason was not disclosed.

In the later months of 2018, she began dating Zach Hickerson, ending in a break two years later. As per some reports, the reason for their break up was violence.

In 2011, this pretty lady was linked up with NFL player Scotty McKnight. However, they broke up in the December of 2012.

Soon after, she was rumored to be dating Ali Raymi in 2013. As per sources, Ali is 16 years older than she. Recently her name was attached to handsome Brian Hickerson.

Both were seen spending quality time with one another at WeHo hotspot Craig’s. Unfortunately, they broke up in July 2020 as this man was arrested and charged with felony assault.

Hayden Panettiere Once Struggled With Depression

After giving birth t her daughter Kaya in December 2014, Hayden started struggling with postpartum depression. Therefore she started taking treatment and went to Utah Treatment in May 2016.

Unlike other celebrities in the Holywood, Hayden is very vocal about her difficulties. She believed that the more she opens about her situation, it could help other women who were sharing the same fate.

It was revealed that Hayden’s daughter is currently living with her father, Wladimir Klitschko, in Ukraine. However, she travels to the place whenever she wants to meet them.

Sometimes she can not get on the plane; at that time, Hayden never fails to facetime call. She has to balance taking care of her kid and her work.

That might be another reason she has not recently committed to her work. Although the couple is no longer together, they share an amicable bond and tend to do what is suitable for their daughter.

Hayden also elaborated that they are still respectful to each other and share an unbreakable bond of friendship.

Hayden Panettiere has always been vocal and clear of thoughts about matters of her concern. She has raised awareness about stopping hunting for rare aquatic animals and has even confronted hunters.

She and other activists successfully disrupted a dolphin hunt in Japan in October of 2007. Hayden Panettiere has been against commercial whaling done by corporations and other groups of people.

She has expressed that she believes in activism because her platform aids in amplifying the voices which are often unheard.

She has also invested a substantial amount of her money in real estate. Hayden’s wealth mainly comes from her work as an actress.

Hayden Panettiere has a total net worth of around $15 million, per online reports.

There is no denying that this beauty is spending her life luxuriously with her family and loved ones. She is often spotted spending her time in fancy places.

Panettiere is active on almost all of the major social media sites. She uses her accounts to interact and communicate with her fans.

She often posts pictures from her daily life as well as from her work on the sets.

Hayden Panettiere has been active for most of her career. But she has not worked on movies or TV series for the last three years. Guess she is just taking a break from her acting career.

Hayden Panettiere has been in a problematic state for some time now. She has said that she is not in the mental state appropriate for raising a small child.

Hayden is single and happy.

Hayden Panettiere’s daughter’s name is Kaya Evdokia Klitschko. She was born during her first relationship with Wladimir Klitschko.

It is not like Hayden abandoned her daughter. However, she lost the custody of her seven years old daughter to ex-husband Wladimir.