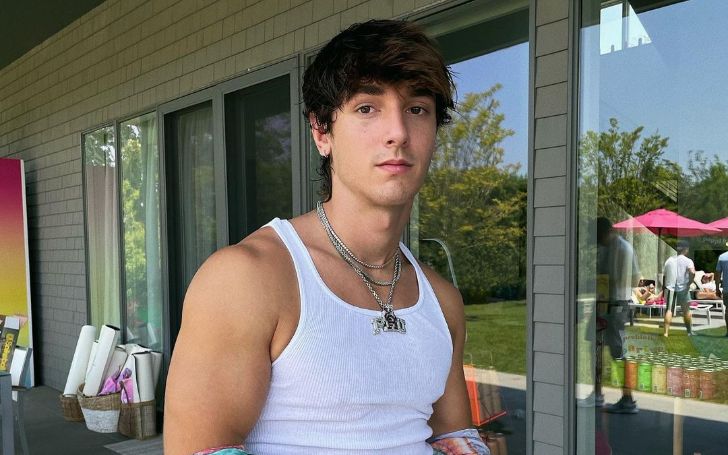 Bryce Hall is a famous TikTok star and YouTuber who got fame by posting funny videos and lip-sync videos on respective social media platforms. This famous persona is also an amateur boxer.

He has been active on video-sharing platforms since high school and now has garnered millions of followers. Bryce has faced a tough childhood and has always come forward with his inspirational story that often motivates the viewers.

Apart from being famous on both of the media, Bryce has been ruling  Instagram as well. Hall’s entry into the Sway House added more charm to the star’s popularity. Added to this he is also one of the internet sensations who got featured in the documentary film about social media titled Jawline.

Star Bryce Hall was born on August 14, 1999. His mother, Lisa Hall, raised him, and the Tiktok star has been vocal about his strained relationship with his dad. This incident, though, has made his mother and him closer.

During his high school days, Bryce was often bullied. Therefore he had a very rough childhood and did not have the courage to speak or face the trauma. Not only that for this star, but it was also tough to get along with people and make new friends.

As he was not that good in person, Bryce started getting online and interacting with people. Unknowingly he became famous overnight.

These stars regularly keep their body healthy and do the gym. Same as with the case of Bryce. With a regular diet and gym, he has maintained his weight at 71 kgs.

The TikTok star’s body measurement is 40 inches in the chest and 28 inches in the waits. Likewise, his bicep measures 16 inches, and his hips measure 36 inches.

If you have been following this handsome then you might be well aware that Hall has wavy dark brown hair which compliments his dark brown eyes. Other than this, Bryce has two tattoos on his forearms. People tend to love his dimpled smile more than anything.

Soon after this, handsome Hall dated Tiktok star and influencer Addison Rae in 2019. Unfortunately, Bryce and Addison broke up shortly in 2021 after knowing each other differences.

They reached the point where they could not go back to what they used to be. Eventually, they parted their ways. Surprisingly the duo was spotted together during the Halloween of 2020 and revealed that they were officially together on October 13, 2021.

Things got hasty in 2021 when this influence was rumored to be dating another diva named Tana Mongeau. Finally, in March 2021, they suggested that they were no longer together by unfollowing each other on their social media accounts.

However, this did not step this Tiktoker to date beautiful ladies in the industry. Eventually, Bryce was spotted lip-locking with social media sensation Riley Hubtka. Despite this, both of them denied the rumors.

Over the years, Bryce has fallen into many controversies. In 2020, Hall was accused of disrespecting the LGBTQ+ community, after which he realized his mistake. Bryce deleted the tweet and apologized for the same.

During the same year, he accused fellow social media influencer Thomas Petrou of stealing money from other members of the Sway House and using it irresponsibly.

On May 25, 2020, Bryce Hall and fellow Tiktok star Jaden Hossler were accused and arrested for possession of drugs and were found with marijuana. Hall was released on bail worth $5000.

In 2021, Hall was sued by a few other Cinco restaurant co-owner Herman Fernando for battery and engaging in violence.

On Twitter, Bryce flaunted $10 million net worth, after which he was shut down for being obnoxious and lying.

According to the reports, Bryce Hall’s net worth is estimated to be $3 million in 2021. The TikTok star does not yet disclose the annual salary.

Bryce is allegedly an angel investor in multiple companies, including Lendtable, Humanin, AON3D, and Stir. He is also the co-founder of ANI ENERGY.

Given his profession, Bryce Hall is very famous on social media.

He has always been on social media. But before joining Tiktok, he studied in high school.

No, they broke up in March 2021. Bryce stated in an interview that “Addison and I are both very different people.”

Bryce’s mom is Lisa, and he is very close to his mother. She has an Instagram handle with the name @brycehallsmom. In one of his podcasts, he said, “As a single mom, she has worked hard to raise me and has always been my number one supporter through everything – including my screwups.”

He has a stepbrother.