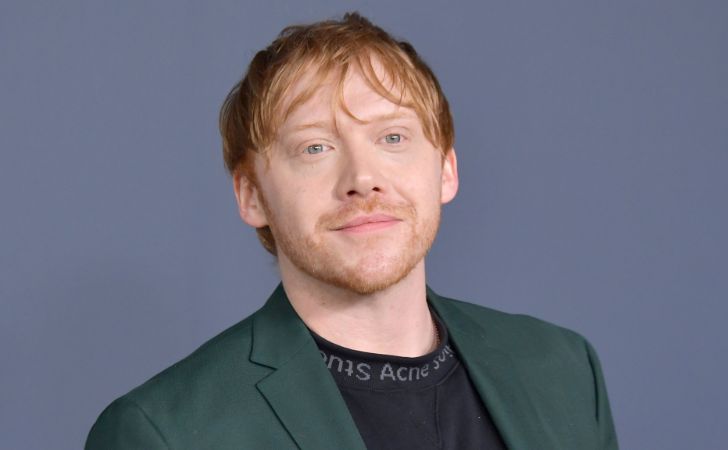 Rupert Grint is an English actor known for his work in the Harry Potter series. Grint has been active in the film industry for more than two decades.

The actor has worked in over 25 films in his long successful career. The talented actor started working in movies but has recently been involved in mostly making tv-series.

He was seen in a music video named ‘Lego House’ by English singer Ed Sheeran. It has garnered more than 250 million views on YouTube alone.

Rupert Grint was born on the 24th of August in 1988 in Harlow, Essex. Grint spent most of his childhood in a city named Hertfordshire in Essex.

He went to Richard Hale School, where he completed his early and high school education. During his early childhood, Grint wanted to be an Ice Cream Man, as per one of his interviews.

Grint has said that he was interested in acting as well as a theatre from a young age. He even used to take part in plays conducted in his school.

As a matter of fact, Grint even went on to join a group named Top Hat Stage and Screen School, which was a local theatre group. For his first role, he played a fish character in Noah’s Ark and later a donkey in another theatre drama.

His father, Nigel Grint, is a dealer of antique objects from the racing world, and his mother’s name is Joanne Grint. The actor has a total of four other siblings.

Rupert Grint is quite healthy and stands at a height of around 5 ft 8 inches. Grint has ginger-colored hair and is known for his red locks.

Rupert Grint was a major character in the world-renowned movie series Harry Potter. Grint was cast in the role of a character named Ron Weasley and was first seen in Harry Potter and the Philosopher’s Stone.

He was then cast in all of the Harry Potter Franchise movies until the second part of Deathly hallows. Grint was also a love interest to Hermione Granger, played by Emma Watson.

In all of the films, he can be seen as Ron Weasley standing beside his best friend Harry Potter, played by Daniel Radcliffe.

Rupert Grint has had a successful and long career in cinema. The Harry Potter series has been the biggest of his career.

He starred in his first-ever role other than Ron Weasley in a movie named Thunderants as a boy named Alan. After the Harry Potter series ended, he starred as Malachy McKinney in a movie called Cherrybomb.

For the last five years, Grint has been chiefly seen in tv-series, although he does enjoy theatre now and then. His first experience in a tv-series was in Happy Birthday Peter Pan, where he voiced Peter Pan.

He is currently playing the lead role of Julian Pearce in a psychological thriller named Servant starting in 2019.

He won his first award at the Young Artist Award for Most Promising Young Newcomer in 2002. Rupert Grint later went on to win Favorite Ensemble Movie Cast for his role in later movies of the Harry Potter Franchise.

He recently won an award by HCA TV Award for Best Supporting Actor in Streaming Series for his role in Servant.

Who Is Rupert Grint Dating?

Nevertheless, it is known that he has been in a committed relationship with a fellow actress named Georgia Groome for about a decade now. She is an English actor who is available from London to Brighton.

The actor has one daughter from his relationship with Groome, born in 2020. He announced about his daughter through his Instagram handle with a picture of himself holding her.

Talking about his hobby, the actor is a big-time fan of the English Football club Tottenham Hotspur. Grint also likes to spend a lot of his time giving back to society and can often be seen in events of various charitable organizations.

He has often helped create support for various Cancer Research in the UK.

In 2016, it was reported that the actor was having a tough time in his career and health issues. The news surfaced that Robert had a partying and drinking problem, resulting in his lack of focus and drive.

Even more, it was disclosed that Rupert was reaching a low point in his career and personal life. This handsome man always dreamed of being a leading man on the stage and screen, but now he is neither.

Therefore Rubert is delusional regarding his work and life. Despite all this, the actor has not spoken any word regarding the rumors of his partying ways and disappointment in his life.

Similarly, he had been denying joining any social meetings and often stated that he would do it if someone asked him to. The diligent actor also confessed that,

“As I got older, I could feel this growing narrative willing me to get engulfed in some big scandal off-screen. It felt like people were waiting for me to go off the rails, but it was never going to happen.”

For Rupert J.K. Rowling Is Stills His Auntie

When Harry Potter author J.K Rowling was having a controversial moment after her opinion regarding the trans community, Rupert said that he disagreed with her point.

The actor confessed that he knows the author as his auntie and does not necessarily agree with her view. However, he believes she is still his auntie despite all the ups and downs.

He initially didn’t even understand how he should spend the money. The actor currently has a net worth of around $50 million. The actor was even ranked among the Top 20 Earners under 25 in 2007.

He joined Instagram and posted a picture with his daughter, which became viral. It reached a whopping one million followers within four hours of making his user ID.

It broke the world record to reach a million fans on Instagram for the fastest time.

Rupert Grint is not married yet. The actor is in a committed relationship with his long-time girlfriend, Georgia Groome.

Yes, Rupert Grint is still very much acting, but not in the same way as before.

No, Rupert Grint is not a billionaire, nor has he ever shown the desire to become one. He is worth around $50 million.

The story is indeed true. When Rupert Grint was young, he wanted to sell ice creams.