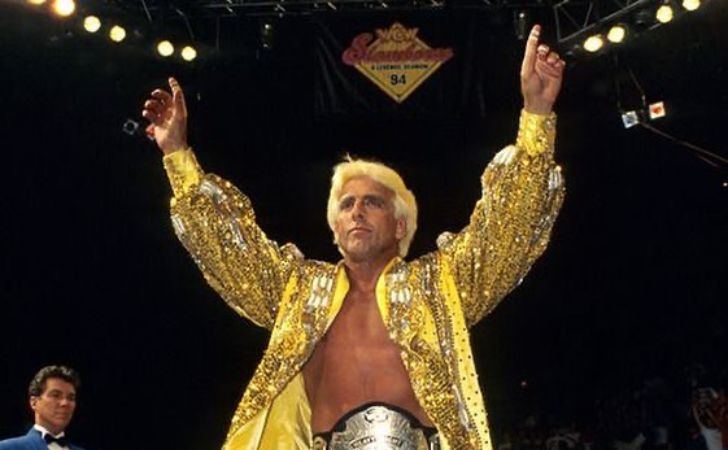 He is still respected throughout the wrestling scene for his legendary performances. Ric Flair’s daughter is now continuing his legacy. She is already a WWE star and favorite of many WWE fans in a short span of time.

Ric Flair’s life has not been without controversies. His actions which turned into controversies have put him in trouble numerous times throughout his long career.

Ric Flair was a fairly talented young boy and started watching in local wrestling championships during his teenage years. This initial exposure to the world of wrestling helped him imagine a career he has enjoyed throughout his life.

Ric Flair was born on the 25th of February in the year 1959 in a city named Memphis in Tennessee. His father’s name was Luther Philips whereas his mother’s name was Olive Philips. He however spent his life as a son of Kathleen Kinsmiller and Richard Reid Fliehr. He adopted him from Tennessee Children’s Home Society as a part of an infamous baby kidnapping scheme.

As per his birth date, Ric Flair is 72 years old as of 2021. Even at this age, Flair is strong physically and mentally thus is an inspiration to the youth of today. Ric completed his high schooling at Wayland Academy located in Wisconsin.

He was known to be an athletic student and took part in all of the major sports like wrestling, football, and track. Although Ric Flair did not complete the college education he did go to the University of Minnesota for a short period of time.

Ric Flair has been known by many names however his official name as per legal papers is Richard Morgan Fliehr. This name was given to him by his adopted parents. There are reports stating that his biological parents named him Fred Philips but it hasn’t been verified yet.

In addition to that, ‘Ric Flair’ is a stage name that he chose for himself during his time at AWA. He fought for the first time as a pro wrestler at AWA against “Scrap Iron” which ended up being a 10 minute draw match.

The wrestler is also known by his other stage name “The Nature Boy”. He adopted this name during his feud against another wrestler Buddy Rudgers who also referred to himself as “Nature Boy”.

Ric Flair spent his early life learning and fighting at the American Wrestling Association. He got the chance to fight against many big names like Dusty Rhodes, Andre the Giant, etc there. It helped him gain priceless experience and confidence which propelled his long successful career.

After working at NWA with Jim Crockett for more than five years, Ric Flair finally came to the WWF. Ric Flair signed an official contract in August of the year 1991 He debuted on TV referring to himself as “The Real World’s Champion.” Soon, Flair began challenging many tops the line wrestlers like Hulk Hogan and Roddy Piper. Just after a year at WWF, he won the Royal Rumble.

He was mostly inactive during and after laters years of the 2010s and hasn’t actively wrestled since then.

Ric Flair stands at a height of around 6 feet 1 inch and weighs 110kgs or 243 lbs. The WWE star has always taken great care of his health both physically and mentally.

Ric Flair Wealth and Net Worth

Ric Flair has kept his personal life mostly away from the public eye. The wrestler got married for the first to Leslie Goodman in the year 1971. The couple has two children from their marital relationship namely Megan Fliehr and David Fliehr. They ended their marriage in divorce just after 12 years.

He then married Elizabeth Harrell who became his second wife in the year 1983. With Harrell, Flair has one daughter named Ashley Fliehr and a son named Reid Fliehr.

The relationship ended in divorce in 2006 after 23 long years. That very year, Flair married Tiffany VanDemark which became his third marriage but this too ended in divorce just after two years in 2009.

In the year 2009 Flair married for the 4th time Jacqueline Beems which also ended in divorce in the early months of 2014. The wrestler is currently married to his 5th wife whose name is Wendy Barlow and is currently living a comfortable life in the state of Florida.

Ric Flair has a total of four children from all of his marriages namely David Fliehr, Megan Fliehr, Ashley Fliehr, and Reid Fliehr. David Richard Fliehr who is his eldest child is a former professional wrestler. He started his journey at the WCW where he received foundational experiences for his later career. Although David did not spend much of his life in a wrestling career, he is still remembered for his performances.

Among Ric Flair’s children, his daughter Ashley Elizabeth Fliehr is currently the most successful. She is currently the SmackDown Women’s Champion. Ashley is known by the stage name ‘Charlotte Flair’ at the WWE.

Ashley began her career playing in the NXT group of WWE and swiftly moved to Raw. She was introduced to a larger audience along with other wrestlers like Becky Lynch and Sasha Banks.

Her later feud with Natalya gave a lot of interaction. After the feud, she even played at WrestleMania 32. The pro wrestling star is currently married to Thom Latimer who is an English professional wrestler.

Ric Flair is quite active on almost all of the popular social media sites. The pro wrestler boasts a crazy amount of following on his user accounts. Flair mostly uses social media to interact with his fans and followers. He often shares pictures from his personal life with his fans on social sites.

Ric Flair has quite a flamboyant personality. He even claimed once that he has slept with around 10,000 women because of his successful career. He later said that even though he has been married several times, monogamy is not for him.

Ric Flair’s last match at WWE was against Shawn Michael. It was the main event at WrestleMania 24 which was a “Career Threatening” as Flair had said that he would retire if he lost. Unfortunately, he did lose the match which ended his long career.

Ric Flair has been married a total of five times. His first marriage was with Leslie Goodman. The couple divorced in 1983. He is currently in marriage relation with  Wendy Barlow and lives in Florida.

Some lesser-known facts about