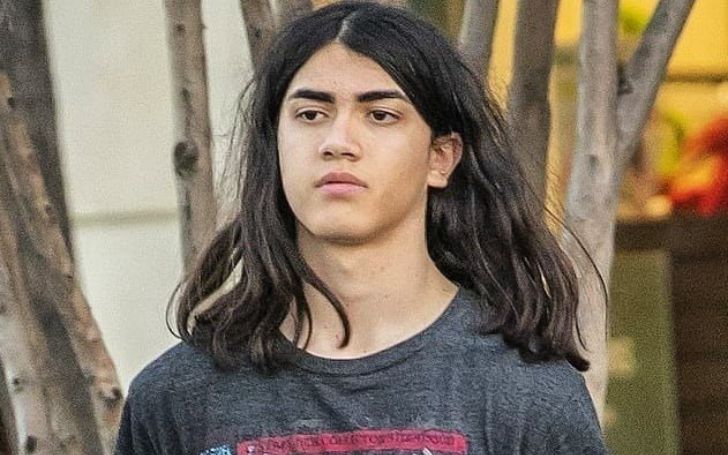 Bigi Jackson is the youngest Michael Jackson biological son. He is famously known as Blanket and came into the limelight when he was only 8 months old.

Fans were shocked to encounter baby Jackson dangling through the balcony when Jackson showed him to the world. Well, it appears that there is always some advantage and a little bit of side effect when your father is the King of Pop.

Despite the fact that he is one of the celebrated kids in the industry, Bigi has not followed in his father’s footsteps. As a matter of fact, he is the victim of bully as a kid.

We always think that being a celebrity kid can be the biggest achievement in one’s life, but that’s not only it. There are several factors that come into account in an individual life along with fame.

Here in this article, we will be discussing all those hardships Bigi has been through in his life.

Who Is Bigi Jackson Mother?

As we are well aware that Bigi is the third kid of famous singer Michael Jackson. The big reveal comes through as the kid is born through surrogacy. Interestingly the name of his mother was still in the dark.

However, in 2009 it surfaced that the hidden woman was a Latino nurse named Helen. Before she comes forward in the media, the section of “The Name of Mother” in the birth certificate was left blank.

Later it was found that Michael personally handpicked that woman to bore his kid. There are some sources who say that she was paid about $20,000 to surrogate the baby.

During Helen’s pregnancy, she was showered with all the love and care that any pregnant woman needs. Jackson used to shower her with expensive gifts and gave her generous expenses.

Along with that, she was volunteered by many staff 24 hours to fulfill her requirements. In addition to this, an unidentified woman was chosen to donate her egg to give birth to big.

Allegedly that woman was paid $3500 for donating her eggs. All the processes were legal, however, the name of the woman was the biggest secret. Some even say that the woman herself is unaware of the fact that her egg was used in the birth of Michael’s youngest son.

Prince Michael Jackson II or Bigi was born in la Mesa, California, the United States of America. He grew happily under the love and care of Michael.

Both of them are some years elder than Bigi but there is no special age gap between them which makes them uninterested in their hobbies and lifestyle. Moreover, Paris and Michael were born to actress Debbie Rowe.

As per education, his initial career is more of homeschooling. Later Bigi is part of some of the biggest schools in Canada.

Why Did He Change His Name?

Previously this young boy was named Blanket and it became the greatest source of bullying in his school days. After Jackson pulled out his greatest stunt to dangle his youngest kid from the balcony to show his fans, this kid was known in the public as Blanket.

As this news spread like a wildfire everybody was well aware of the stunt. From kindergarten kids started calling him Blanket, Likewise, he got tired of it and later changed his name to Bigi. Apart from this he is highly famous as Prince Michael.

How Old Is Bigi Jackson?- Age, Height, and Body

This young and talented individual was born in the year 2002 and in 2022 he is 20 years old. Recently he celebrated his birthday on the auspicious day of the 21st day of February.

Also, he falls under the sun sign of Pisces. Throughout the years, Bigi has changed a lot but one feature has been with him since his childhood and that is his long black hair.

As he is in a growing phase, there is no valid information about Bigi’s height and weight.

Unlike his father, Jackson has a white skin complexion and a chiseled face. He has not undergone any facial surgery until now.

In his spare time, he likes to do acting and spends significant time with his cousins and siblings. not to mention he has a total number of 30 friends and cousins.

Who Is The Girlfriend of Bigi Jackson?

Being Micheal’s son was enough to push him to the limelight but his looks did the charm. His big eyes, cute smile, and shy nature have captivated several young women around the world.

Despite all this, no girl or woman in his life enchanted him. Therefore, we can honestly say that Bigi is a single man.

This 20 year old kid is focused on his career more than ever and is working hard to be as famous as his father. That may be the foremost reason why this handsome man opted to not date anyone until now.

Furthermore, we also believe that it is not the proper age for Bigi to be committed to anyone. henceforth, for the time being, he is working to increase his grades.

There is no denying that legendary singer Michael Jackson made a hefty amount of money from his songs and work. During the time of his demise, he had a total net worth of $500 million.

Similarly, his estate and other endeavors were worth $700 million. After his untimely demise, the remaining of the wealth goes to the kids.

According to reliable sources, Michael left 40% of his earnings to the three children to split evenly. Along with that, another 40% was passed on to his mother Katharine and the remaining 20% was donated to a different children’s charity.

Not to mention it was also written in his will that after Katharine’s death 40% money belonged to his kids. Currently, Bigi owns a total net worth of $100 million in 2022.

If you are wondering where this man spends his money then it is definitely on his education and lifestyle. In 2020 Bigi bought a huge mansion worth $2.6 million in Calabasas.

Now, he is ready to stand on his own foot and build his life. This house expands up to 6,000 square feet and consists of six bedrooms and 7.5 baths.

It was built in 1990 and has been renovated. It also has a private gym, dual spa-style baths, steam showers, a three-car attached garage, three fireplaces, and a huge backyard.

Similarly, Bigi neighbors are some of the celebrities in the industry. Some of them happen to be Dr.Dre, O.J. Simpson, Kendra Wilkinson, Marcia Clark, and NBA star Al Harrington.

Young Bigi joined the YouTUbe channel on the 16th May of, 2019. The channel name is Fil Family, and his brother often appears along with him.

Until now, the channel has gathered more than 2,043,250 views on YouTube. Both brothers talk about movies, reviews, and Oscars on the channel.

In addition to this, the duo brothers talk about books on rare occasions.

Their oldest video was released three years ago and titled Avengers Endgame: Review (repost). Their most viewed video until now is titled Sonic the hedgehog: Movie review.

If you have been knowing Bigi for quite a long time, then you can follow him on the link below;

Many might not know this, but the famous kid has been working as a climate activist.

The star resides in the Calabasas, California house, which he purchased in March 2020.

His real name is prince Michael Jackson, with the nickname Blanket. Earlier, Michael used to hide his face when he was a kid with a blanket in order to cover his identity.

Michael’s son is an American citizen.