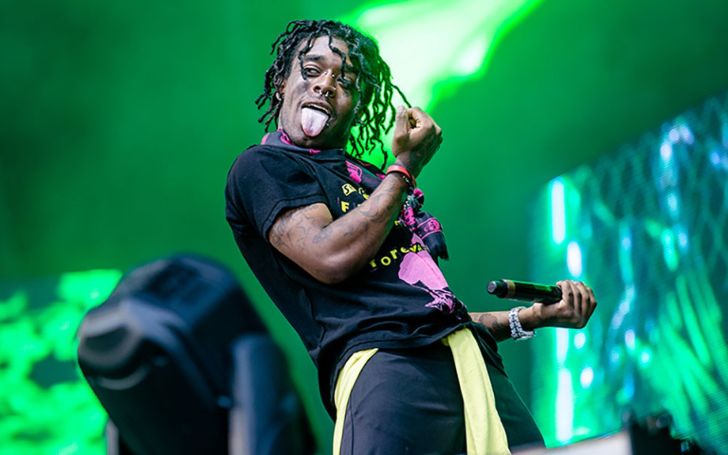 Lil Uzi Vert is a profound singer and rapper. He is renowned for having facial tattoos, dreadlocks, piercings, and his way of presenting himself in an androgynous fashion.

Among all, the most special thing about this rapper is the diamond piercing on his forehead. He says that it is his lucky gem, and surprisingly it costs around $24 million in the market.

That alone describes that his exquisite piece of music has made him earn a hefty amount of money. To be precise, he has once ranked under 20 highest paid rappers in the world.

Lil has produced songs such as The Way of Life Goes, Money longer, Sanguine Paradise, P2, Drankin N Smokin, 20 Min, You Was Right, New Patek, Erase Your Social, Do What I Want, Sauce It Up, ps & Qs, That’s It, Baby Pluto to name few.

Due to his work and accolades, he has won MTV Video Music Awards under the category of Song of Summer and has been nominated on the Billboard Music Awards.

In this article, we will be talking about this brilliant rapper in detail. Before all this, why don’t we take a good look at some quick facts;

What Is Lil Uzi Vert Real Name? Where Was He Born?- Parents and Childhood

This superhit rapper’s name is Symere Woods, and he was raised in North Philadelphia’s Francisville neighborhood. For some reason, he has not shared his parents and siblings to the media.

Maybe he wants to save the Woods family from the negative impacts of publicity. This rapper started writing raps in the 10th grade.

Vert was inspired by his fellow mate William Aston who at that time did a freestyle over a remade of Chris Brown instrumental. During that time, he used to call himself a “regular kid. I did not really wanna rap.”

Soon he collaborated with his friend Willian to create a rap group named Steaktown. When this man was 17 years old, the band was no longer in action.

When he was a young kid, Lil used to listen to Mikes Jone and Ying Yang Twins. After that, rappers such as Meek Mill and Wiz Khalifa influenced him.

Eventually, he started listening to other artists Marilyn Mansion, My Chemical Romance, Smash Mouth, Rocket Summer, The All-American Rejects, Simian, to mention a few. At the tender age of 13, he became a die-hard fan of Marilyn Mansion. One of his favorite albums was Mechanical Animals.

As per reliable resources, Vert worked in the Bottom Dollar store. Only after working for four days, his mother kicked him out of the house.

Frustrated by his mother’s act, he got his first face tattoo. The word “faith” was written under his hairline, which inspired him to initiate his rapping career.

When Is Lil Uzi Vert Birthday? How Old Is He?

Well, it appears that he memorized his birthdate incorrectly. Recently he celebrated his birthday on the 31st day of July, and therefore he fell under the sun sign of Leo.

Similarly, he weighs about 150 pounds which is 68 kg in general. The most distinct feature of this rapper is his multicolored deadlock, a stylish septum piercing, and tattoos on different parts of his body.

Moreover, Vert is blessed to have dark brown eyes and Smalltalk hair. However, he sometimes likes to dye it in different colors.

Who Is The Girlfriend of Lil Uzi Vert? Is He Married?

Previously this talented rapper was linked up with author Brittany Renner. The news of their relationship was disclosed in the most dramatic way ever.

She wrote a book named Judge This Cover, and the book consisted of the fine detail of this man. He received a pseudo name Hector in the chapter of Dancing with the Devil.

Moreover, this lady posted a picture of this rapper on Instagram with a chapter from her book. She stated,

“I swallowed your kids twice before noon, I call that a Champion’s Breakfast.”

Other than this, Brittany also claimed that he was with other girls when they were together. The second girl o the list is none other than Brittany Byrd.

They had a five year-long relationship from 2014 to 2019. During their time together, this lady eve filed a case against Lil for threatening her with a gun.

Considerably she was hospitalized after the assault. Her manager even elaborated that the rapper had been stalking her since they broke up. He added, “Uzi is toxic and mentally and physically abusive. He has been for years.”

For the time being, he is madly in love with rapper JT. they have been together since October 2019, and their love is growing strong more than ever.

What Is The Net Worth of Lil Uzi Vert?

This hip-hop artist made a hefty amount of money from his career as a rapper. At the time of writing, Lil is enjoying a huge net worth of $25 million in 2021.

There is no denying that he was once listed under 20 highest-paid rappers on the planet. Amidst the year September 2017 and September 2018, Vert earned about $20 million.

Moreover, Lil has done approximately about 76 live shows all over the world. Added to that, he has more than 3.5 billion streaming views.

Why Did Lil Uzi Vert Take Out the Diamond From His Forehead?

The main reason behind why this rapper decided to take out his $24 million worth of diamond from his forehead is that Lil lost his diamond when he was surfing through the crowd during the concert in Miami. Vert stated,

“I had a show on Rolling Loud and I jumped among the crowd, and they kind of ripped the diamond out of my forehead.”

Despite all this, he somehow received the diamond and did not bother to share it on the media. However, since then, Lil has not put the diamond in the righteous place.