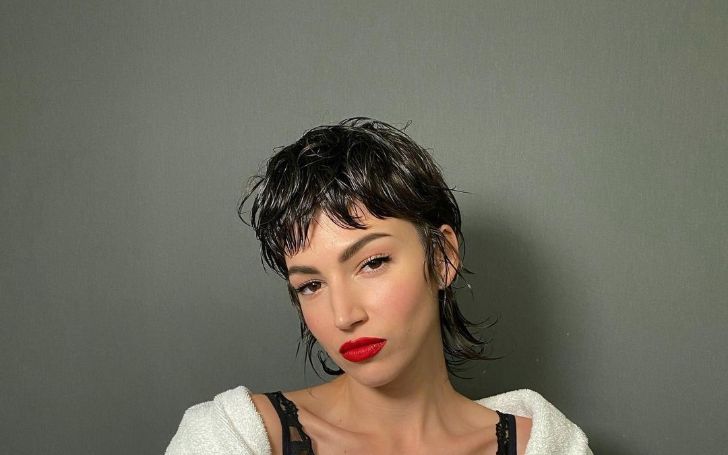 The actress began her professional career with television advertisements and music videos then went on to do TV shows, and is now working her way up to Hollywood. Stick with us to know more about her.

Úrsula Corberó Delgado was raised in Barcelona, Catalonia, Spain, and born on 11th August 1989. Her parent’s names are Pedro Corberó, a carpenter, and Esther Delgado, a shopkeeper. The actress also has a sister named Monica Corberó.

The gorgeous actress holds Spanish citizenship, belongs to the Hispanic ethnicity, and is fluent in Spanish and Catalan.

When it comes to her personality, Ursula is a natural leader with exceptional motivation and persistence. The Spanish actress demands freedom of thinking and action insists on her right to make her own decisions, and will not let anything or anything stand in her path.

Age and Body Measurements| How Tall Is Ursula Corbero?

Tokyo’s hair is naturally dark brown, and she mostly likes to keep it short, inspired by her look in Money Heist. Her piercing brown-colored eyes are one of her most noticeable features.

The actress also loves tattoos and has a few of them on her body.

Úrsula Corberó was born to a middle-class family in Spain. Corberó grew up in Sant Pere de Vilamajor along with her parents and her sister. She finished her education in her hometown and then earned her degree from Eolia, Escola Superior d Art Dramatic in Barcelona.

After completing her studies in 2008, the beautiful actress moved to Madrid to star in the popular Spanish Teen Drama series Fsica o Qumica.

Since a teenager, Ursula has been attracted to artistic practices such as music, dancing, and acting. She also enrolled in various acting classes and also learned flamenco and jazz dance forms.

Ursula Corbero started her professional career as a model and later started working in TV shows and movies. In 2002, she made her television debut as Maria in the Spanish television series Mirall Trencat. She was then cast as Sara in the Catalan TV series Ventdelpla from 2005-2006.

In 2007, Corbero appeared in episodes of the TV shows Cuenta atras as Daniela and El Internado as Manuela Portillo.

She then resumed her studies. After finishing, she moved to Madrid to play Ruth Gomez, one of her most notable roles, in the Spanish comedy-drama television series Fisica o Quimica from 2008 to 2011.

In the meantime, she starred in two short films: Cronica de Una Voluntad in 2007 and Slides in 2011. One of her notable early features includes the role of Belen in the 2011 horror film Paranormal Xperience 3D.

In 2013, she co-starred in the comedy Who Killed Bambi? with Clara Lago and Quim Gutiérrez. Both reviewers and the general public praised the film.

She starred as Margarita de Austria in the famous historical series Isabel in 2014. The same year, she became the first actress in history to be honored with the Untameable Award at the Sitges Film Festival, a milestone in her career. Men’s Health magazine declared her Woman of the Year, an honor she accepted from her friend and iconic actress Rossy de Palma.

In March 2015, she co-starred in Perdiendo el Norte as Nadia, alongside Blanca Suarez and Yon Gonzalez. Moreover, in the same year, she also won the Ciudad de Alicante Award, an award created by the Alicante Film Festival to inspire young Spanish talents.

In December 2015, she landed a lead role in La Embajada, a new suspense series written by the Gran Hotel makers.

Corberó then landed a career-defining role in the heist tv series La Casa de Papel in 2017. She portrays Tokyo, the story’s hero, a fugitive thief who the Professor scouts to engage in his scheme.

It first aired on Antena 3 in Spain and was later made available internationally through Netflix. She received an Atv Award for Best Actress after being nominated for Best Actress in a TV Series. At the 46th International Emmy Awards, the series was named Best Drama Series. It became a worldwide sensation and is now the platform’s most-watched non-English-speaking film.

Snatch, an American crime drama series was her first English-language role in 2018. She co-stars with Rupert Grint and Luke Pasqualino.

In 2019, she starred in the Spanish comedy series Paquita Salas as herself. In 2021, she is currently shooting for the final season of La Casa De Papel.

Úrsula Corberó is one of the most prominent actresses in the industry. The diva has done a brilliant job with the roles in Money Heist. But Úrsula Corberó’s plastic surgery has been something to talk about the diva.

When we look at the past images of the actress, there is a vast difference in her facial look. Although she has not confirmed about the plastic surgery the fact remains.

According to skin doctors, this diva has done her nose, chin, and also the cheeks to make it look more compelling. Without a doubt, the images of before and after do justice to what the fans are saying.

Spouse| Who is Ursula Corbero Dating?

Ursula Corbero started dating Spanish actor and dancer Israel Rodriguez in 2008. They were both very private about their affair. The two kept their romantic relationship under wraps and never disclosed when they first met.

In 2010, the duo collaborated on the television series Fsica o Qumica. Corbero had been a member of the series’ cast since 2008, while Israel had starred in a few episodes in 2010. The two broke up the same year, with no apparent explanation for the breakup.

After splitting from her former bae Israel, Ursula Corbero was linked with tennis player Feliciano López in 2011. Nothing was ever revealed to the media from the couple’s side. The duo reportedly dated for five months and called it quits.

In 2013, the money heist fame actress began dating Spanish model and actor Andres Velencoso. The duo met on the sets of Física o Química. They were spotted together at various award shows and events; however, none of the parties confirmed the news. Eventually, they ended their relationship in 2016, after three years of dating.

The final name that the actress has been linked to as of now is actor Chino Darin. The pair met on the set of La embajada in 2016 and immediately clicked. They’ve been dating and working together in Madrid since then.

Net Worth| How Much Does Ursula Corbero Earns?

Corberó endorses a variety of brands, including Bvlgari. She is well-known for being a fashion model. The actress has modeled for various high-end brands, including Tampax, Maybelline, Stradivarius, among several others.

In addition, Ursula has been actively involved in the industry since 2007. And she’s recently gained massive popularity and international acclaim for her performance in Money Heist.

As a result of her modeling career, acting endeavors, and endorsement deals, her net worth is enormous. Her net worth, as of 2021, is estimated to be $3 million.

Úrsula is one of those celebrities who is very active on social media and likes to keep her fans updated about her daily life and future projects. Till now, Úrsula is only on two social media platforms – Instagram and Twitter.

This Money Heist actress has one sister who is older than her.