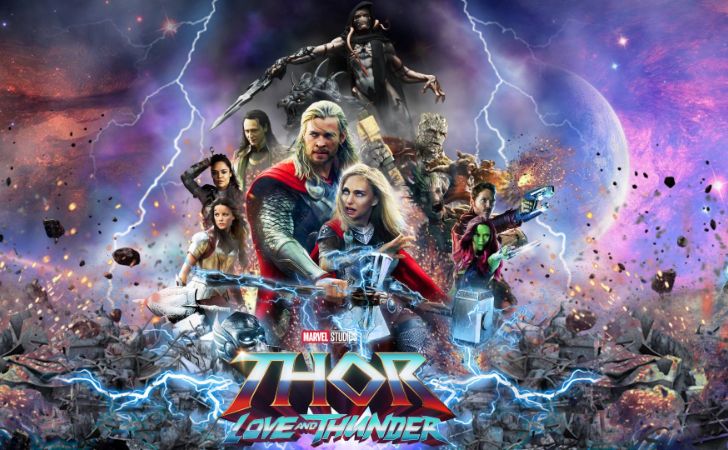 Thor: Love and Thunder are one of the most awaited movies by film critics. Marvel Cinematic Universe released three Thor movies till now and is set to release one more.

In the Avengers Endgame, Thor gained a lot of weight. Consequently, fans will see a different fit and healthy Thor in this movie. From a drunk and demotivated Thor, fans will catch sight of Thor, who is fighting hard to gain inner peace. Meanwhile, Jane Foster, Thor’s ex-girlfriend, appears in the trailer.

There is also a presence of the cast of Guardians of the Galaxy, Zeus, Sif, and also the king of the new Asgard, Valkyrie. However, the antagonist, Gorr, The God Butcher, is making a vow to kill all gods and make them extinct.

Moreover, lots of the characters in the film are old, and only a few new characters are showing up in the upcoming film.

Christopher Hemsworth, also known as Chris Hemsworth, is an Australian actor. The actor started his career in 2002 by performing minor roles in Television series like Guinevere Jones, Marshall Law, Neighbours, and The Saddle Club. From 2004 to 2007, Hemsworth played a prominent role in Home and Away’s TV series.

Likewise, in 2009, the actor starred in J.J. Abrams’ film Star Trek. In the same year, Hemsworth played a role as Kale in A Perfect Getaway. In 2011, Marvel Cinematic Universe cast him as a superhero, Thor: The God of Thunder, in the movie with the same name Thor.

The Spanish model and actress Elsa Lafuente Medianu, known as Elsa Pataky, and Chris Hemsworth married in 2010. They have three children together. Chris has two brothers, Luke Hemsworth and Liam Hemsworth.

Hemsworth is known as one of the highest-paid actors in Hollywood. Hence, he will be returning as Thor in this movie.

Christian Charles Philip Bale is a versatile British actor. Bale is renowned for his ability to adapt and transform his whole physical appearance following the role in the movie or TV show. At the age of 13, the actor debuted in the world of cinemas through the film Empire of the Sun, released in 1987.

According to film critics, Bale’s breakthrough role in his career was playing the role of Patrick Bateman in American Psycho. In addition, Christian Bale, another most loved character, was Batman.

Christian Bale plays the role of Gorr, The God Butcher, in this movie.

Natalie Portman started her career at the age of 12, starring as Mathilda in the movie Leon: The professional. Portman is an American performer born in Israel. The actress has an intensely wide range of film careers.

Portman played distinct roles in many blockbusters and representational films from a very young age.

Natalie Portman starred in Thor alongside Chris Hemsworth in 2011 as Jane Foster. The outstanding actress is also portrayed as Jane Foster in Thor: The Dark World and Avengers: Endgame. Consequently, Portman will return as Jane Foster, the Mighty Thor, in this movie.

Tessa Lynne Thompson is an American singer and actress. The actress’s roles in Thor: Ragnarok, Westworld, Creed, and Veronica Mars are some the well-known characters. Thompson received favorable attention for performing in Dear White People, a comedy-drama movie.

Thompson is portraying the role of Valkyrie, king of new Asgard, in this forthcoming movie.

Furthermore, there are other casts whose glimpse we can get in the movie. The crew of Guardians Of the Galaxy such as Chris Pratt as Star-lord, Pom Klementieff as Mantis, Karen Gillian as Nebula, and Vin Diesel as Groot (voice), is starring in the movie. Sam Neill is portraying the role of Odin, Matt Damon as Loki, and Melissa McCarthy as Hela.

Thor: Love and Thunder are releasing in the USA on 8th July 2022, whereas in India, it is releasing a day before, 7th July 2022. Walt Disney Studios Motion Pictures is distributing the movie directed by Taika Waititi as a component of phase four of MCU.

Expectations of Fans from the Movie

Both MCU and Thor movie fans have expected not to see the same drunkard Thor in this movie. Thor: Love and Thunder are another highly anticipated movie after Multiverse of Madness. In Avengers: Endgame, some of the fans seem shockingly disappointed after seeing Captain America able to hold Mjollnir.

Since the opening of the multiverse, anything can happen next. So, the viewers should not have any wild expectations from the movie before watching it.

After a week of production and filming of the move, the directors shared an intimate moment with Rita Ora. The picture went viral on the internet. Watiti was reportedly dating Tessa Thompson at that time.