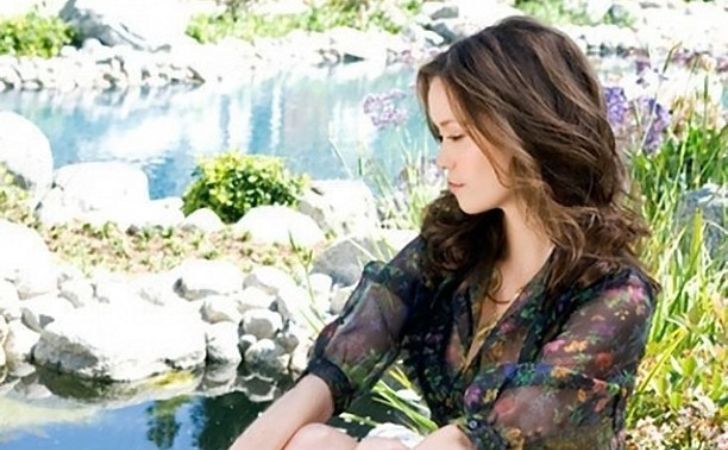 Glau has also been in the other TV shows like The Unit, The Cape, and Sequestered, as well as guest appearances on Angel, Cold Case, The Big Bang Theory, Chuck, and Hawaii Five-0.

The star has appeared in the American horror-comedy film, Knights of Badassdom, and has also appeared in a variety of TV shows and short films, including Mammoth, The Initiation of Sarah, Deadly Honeymoon, Help for the Holidays, Dead End, and Inside the Box, to name a couple.

Summer Glau was born on July 24, 1981, in San Antonio, Texas, United States. Her mother, Mari Glau, is a schoolteacher, and her father, Mark Glau, is a general contractor. The actress has two younger sisters, Kaitlin and Christie.

Glau is of American nationality and belongs to the mixed ethnic background of German – Alsatian German, Swiss-German, Scottish, Irish, Welsh, and English.

Summer Glau is a Leo, and by the virtue of her zodiac trait, the actress is a high-energy girl who is still on the move, fiery, and very hyperactive. Glau has a deep drive to transform thoughts into practice, and she is a visionary, hoping to make a meaningful difference in people’s lives.

As of May 2021, the star is 39 years old, with her 40th birthday coming up in two months. And, Summer is a stunning actress who stands 5 feet 7 inches tall and weighs about 54 kilograms. In addition, her body measurements are 33-23-33 inches.

Summer Gau’s great body is the result of more than just good genes, and the actress works hard to maintain her physical beauty by eating right and exercising regularly. Her workout routine consists of dance and spin classes, weight training, hiking, and sometimes cardio as well.

Glau has luscious and beautiful dark brown tresses. Furthermore, this beautiful actress wears a dress size 4 (US) and shoe size 7.5. (US). With such a luscious body and a cheerful smile, she has earned a huge amount of fan following all around the globe.

As a child, Glau received a scholarship to a ballet institute and was homeschooled from grades 3 to 12 to accommodate her ballet training. The actress was classically trained as a ballet dancer and studied tango and flamenco.

Ballet is a graceful and strong style of dance, but it has been known to injure dancers’ hips, feet, knees, and ankles. Stress fractures and arthritis are also very common. In Glau’s case, her issue began with a fractured foot. Instead of resting to allow it to recover, she danced on it for four months.

Summer subsequently developed tendonitis in her ankle, causing her to lose all foot movement. Her ballet dancing career came to an end when this beautiful actress was 19 years old.

Summer says that before becoming a celebrity actor, she appeared in advertisements and danced the Tango for about a year to cover her bills.

Summer Glau made her acting debut in an episode of the 2002 drama series Angel. Summer went on to appear in the dramas, Firefly and Cold Case. Glau appeared in the 2004 film Sleepover. The actress was cast as Tess Doerner in the series The 4400 the following year. Soon after, the actress landed roles as Crystal Burns in the drama series The Unit, and Jack Abernathy in the television film Mammoth.

Then, in 2008, Glau was cast as Cameron in Terminator: The Sarah Connor Chronicles. Summer also appeared in the tv shows, The Big Bang Theory and Dollhouse. Following her appearance in the TV film Deadly Honeymoon in 2010, Glau played Jamie Fleming and Skylar Adams in the dramas, The Cape and Alphas, respectively.

However, Summer has made an appearance on two tv shows, Caste in 2016 and Wu Assassins in 2019.

Glau has received several honors and awards to date. The actress was twice included in the 100 Sexiest Women in the World by FHM and once ranked #8 in Wizard magazine’s list of Sexiest Women on TV.

The American beauty was also given a place in Maxim’s Hot 100 list. Coming to her acting accolades, Glau has won SFX Award for Best Actress for Serenity. Her performance in the film Terminator: The Sarah Connor Chronicles brought her the Saturn Award for Best Supporting Actress.

Before marrying in 2014, the actress had been dating fellow actor Val Morrison for five years. The couple has kept their relationship very private, and little is known about them. The whole world was unknown about their love affair until they made it official with their marriage.

The actress gave birth to her first child, Milena Jo Morrison, in 2015. Sunny Isabou, their second daughter, was born in October 2017. As of 2021, the actress is enjoying her motherhood and enjoying life with her husband and children.

Summer Glau has been absent from the spotlight for some time, but she appears to be making a comeback. Hopefully, she’ll be back on set soon, re-establishing her reputation as a fantastic film star.

What’s fascinating is the fact that other than Val there is no information about any other men in her life. With the beauty and charm Summer is, she surely had someone prior to Morrison. It is her beautiful disguise that anything on that is still under the radar. With no extramarital affairs from the marriage, we hope Val and Glau go a long way.

Net Worth| How Much Does Summer Glau Earn?

After actively working in the film and television industries for nearly 19 years, the actress’s total net worth is estimated to be $4 million, which is not unexpected given how hard-working and talented she is and how successful her films and television series are. Almost all of her earning is from movies and series.

But at times with the popularity owned by the diva, she has also gone through with the brand promotions and photoshoots for the magazines. This allows the net worth meter to just spike up. Interestingly she has decided not to talk more about this aspect of her earning.

The talented actress has been in several blockbuster films, and her outstanding performance in these films is responsible for her enormous net worth. However she is open about the net worth, anything on the annual income and also the assets owned are not known.

With her contribution to the showbiz world, Glau surely has a good amount of annual income. She might also have a collection of cars and mansions under her name. But the silence makes it hard to know everything about it. If someday some fruitful information will come out readers will be made aware.

On the one hand, today’s celebrities are so much involved in maintaining their social media profiles and increasing the value of their brands, but on the other hand, Summer Glau is completely absent from the world of social media.

Glau is said to enjoy living on her terms and to be unconcerned about what is happening in the digital world. The actress is content at home with her husband and children and is a happy homemaker.

This stunning lady, however, has a slew of social media fan clubs devoted to her. Her fan pages never fail to post updates when she attends certain functions or shows