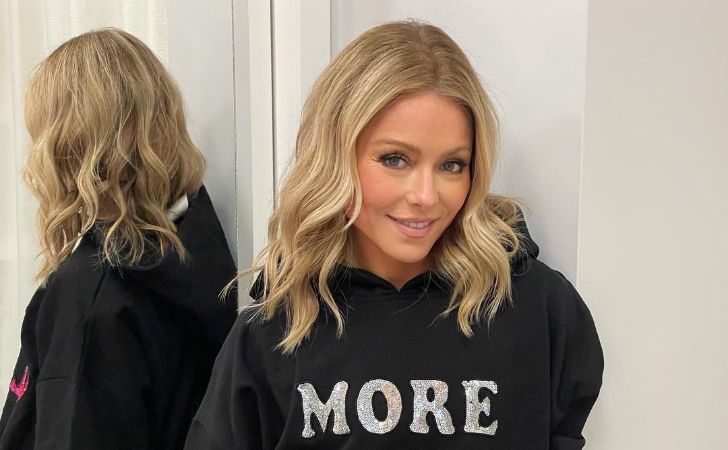 Kelly Ripa is a multi-talented personality having worked in various fields like hosting, acting, dancing, production, and many more. She has been active in the show business for more than four decades now.

She began her career in show business and as an artist with dancing. After gaining popularity, Ripa began experimenting with her art and made a name for herself in other fields. Ripa is recognized to be one of the most powerful people in the Media Business in America.

Ripa is currently working mostly as a producer for many movies and tv-series under her own watch. She was one of the co-executive producers in a tv-series named Exhumed which began airing on the 17th of January 2021.

The actress has been awarded at many prominent awards shows for her work as an actress as well as a host. Interestingly she also broke Guinness World Record for most banana-cream pies tossed in mouth in one minute in one of her shows.

Let’s learn some quick facts about her life:

Born on the 2nd of October in the year 1970, Kelly Ripa is 52 years of age as of 2022. The actress was born in New Jersey to Esther and Joseph Ripa. Her mother was a homemaker whereas her father Joseph Ripa worked as a bus driver.

Her father was also the Labor Union President. Talking about her origin, she has Irish and Italian roots. The acting was an unheard-of work in her family as she was the first person to professionally work as an actor.

Kelly Ripa went to Eastern Regional High School for her early studies. Her passion for acting was nurtured while she was still in high school. Ripa’s school drama teacher suggested that she try out acting.

She began training herself in theatre plays which helped her learn the foundations of acting. Ripa began her higher studies at Camden County College with majors in Psychology but soon dropped out of the course for passion.

Kelly Ripa began her career in the show business as a dancer. She was on a dancing reality tv show named Dancin’ On Air. She was soon seen in another popular show named Dance Party USA. Ripa has planned of becoming a newscaster at that period of time in her life.

But her life completely changed after she starred in a show named All My Children. She played the role of a character named Hayley Vaughan in the show who is a party girl. Ripa began her role in the series in 1990 and concluded in 2002 after working in the show for twelve years.

Ripa came back to tv show in 2003 after being cast in a show named Hope & Faith. She played the role of an unemployed former tv star in the show.

The show was a big hit and had big names like Megan Fox and Ted McGinley. It was one of the highest-rated shows on ABC while on air. Ripa appeared in a movie called Marvin’s Room starring alongside behemoths like Leonardo DiCaprio and Meryl Streep.

Kelly Ripa began working as a tv show host in 2001. She worked alongside Regis Philbin and later went on to host the show single-handedly.

With her appearance in the show, the ratings skyrocketed as she was much closer to young viewers than Regis. The show is currently named Live with Kelly and Ryan. Ryan Secrest is her co-host as of writing since he replaced Strahan.

After working in the show business for several years, Kelly Ripa started her own production company in 2007. She started her company named Milojo along with her husband Mark Consuelos.

The first work under the production company was a documentary named The Streak. It talked about the winning streak of Brandon High School in wrestling. The show went on to get nominated at the Emmy.

Kelly Ripa is married to co-star Mark Consuelos while working in the show All My Children. They married a year later in 1996. Ripa has three children from her relationship with Mark Consuelos namely Joaquin Antonio, Lola Grace, and Michael Joseph.

She has been involved in various charity events and organizations throughout her life. Ripa is especially involved in spreading awareness about Ovarian Cancer. She reportedly helped raise a whopping $3.5 million for The Ovarian Cancer Research Fund in the year 2011. She has also been involved with a group named Mothers Against Drunk Driving.

Other than Mark in her life, there is hardly anyone who has come through Kelly. Although she is vocal about her life in the media, there is nothing available about the past relationship. She is in a pretty good space when we talk about the love life. It seems like this relationship will go on for a very long time.

Kelly Ripa is reportedly worth around $120 million as of 2021. She has earned most of her wealth thanks to her work as an actor and host. Ripa has also signed brand deals with many companies like Tide, 7 Up, and TD bank. She also works as a spokesperson for several multinational companies.

Kelly Ripa has also invested a big chunk of her wealth in real estate. Ripa owns a townhouse in New York which is worth around $30 million. She has also bought herself a home in Hamptons for nearly $2.35 million.

Ripa has won several awards for her work in show business. She won her first major award at the New York International Independent Film and Video Festival. Ripa was awarded Best Actress Awards for her role in the movie The Stand-In.

She later went on to be nominated for three Daytime Emmy Awards but could not win any of them. To put it in a nutshell, she has 11 awards and 41 nominations in all of her careers to date.

Kelly Ripa is quite active on social media. She uses her accounts to efficiently connect with her followers and fans. She often gives updates about her day-to-day life to her fans on her social media accounts. Ripa has a large following specifically on Instagram.

Kelly Ripa does have a daughter and her name is Lola Grace. Grace was born on the 16th of June in the year 2001 and is 20 years old right now. Grace is studying at New York University as of now.

Mark Consuelos is Kelly Ripa’s first and only husband. They got married on the 1st of May in the year 1996 by eloping away only after a year of dating. The couple has been married since then and still have a great relationship.