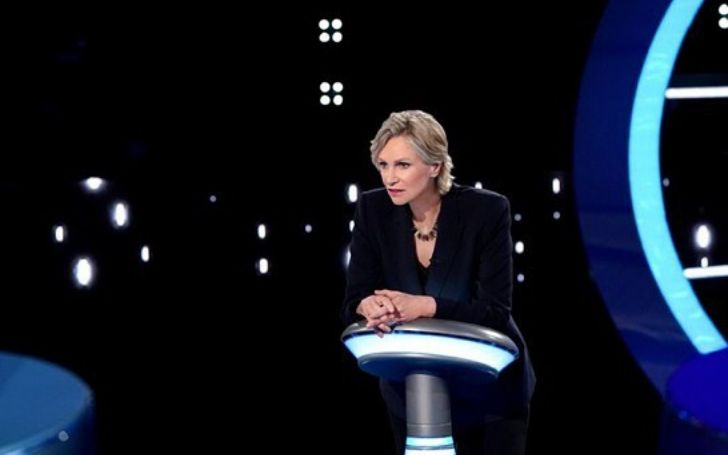 Jane Lynch is an American author, actress, and comedian. Lynch is well known for her comedic work in several movies and TV series. She has spent the last four decades working in the entertainment industry.

Having worked with popular actors, Lynch is a famous face of Hollywood. She has extensively worked as a voice actor in movies like 100% Wolf. Lynch began her journey in the entertainment business primarily starring in minor roles. She started gaining traction during the early 2000s, starring in works like Role Models, The Rocker, et cetera.

Apart from being an actress, Jane Lynch has also worked as a producer in a couple of works of cinema. Her first experience as a producer was in a short movie named Ronny & I in 2013, where she worked as an executive producer. Let’s learn some quick facts about the actress:

Jane Lynch’s age as of writing is 61 years. The actress was born on the 14th of July in the year 1960. Lynch started her acting career in movies at a relatively later age.

She initially spent her early 20s working in a theatre company named Steppenwolf Theatre Company. Lynch was well known in the company for her comedic timing and improvisation.

Jane Lynch stands at the height of 6ft and weighs around 70kgs. Lynch has blue-colored eyes and natural blonde hair. The actress always had a slim and fit body. She takes extra care of her health and likes to keep her diet healthy.

Her parents were Catholic. Lynch completed her early studies at Thornride High School in Illinois. The actress went to Illinois State University, where she completed her Bachelor’s Degree in Theatre and Arts.

After college, she began spending most of her time at Steppenwolf Theatre Company. She soon joined a comedy group named The Second City.

The actress was praised for playing the role of Carol Brady in a play named The Real Live Brady Bunch. It was during this time she became friends with actor Andy Richter.

Jane Lynch has a long list of movies she has worked in. She has a total of 231 acting credits on her IMDb page. The actress began her journey in the world of cinema after her work in a movie named Vice Versa in 1988 when she was 28 years old.

The actress had a small role in the movie. For several years, Lynch played smaller roles in several films and was well known as Guest Cast in the industry.

The actress got her first break from the movie starring Steve Carell named The 40-Year-Old Virgin. The actress played the character of Paula and was praised for her acting.

She then started getting important supporting roles in movies which helped her get nationwide fame. After this, she starred in famous works like Alvin and the Chipmunks, The Rocker, Another Cinderella Story, Wreck-It Ralph, etc. The actress is all set to star in a movie named Ivy and Bean, which will be released in 2022.

Lynch also has a long successful career in tv-series. Her debut role was of a character named Michelle Hathaway in a tv-series named Bakersfield. She then appeared in smaller roles in series like Married… With Children, Party of Five, In the House, NewsRadio, Cybill, 3rd Rock from the Sun, Dharma, and Greg, Dawson’s Creek, The West Wing, Boston Public, Family Law, The X-Files, The King of Queens, et cetera.

She got a substantial role in tv-series Lovespring International in the year 2006. But the part that helped her praise and success was that of Sue Sylvester in the tv-series Glee.

Her role was loved by the audience as well as the critics. It has even been called “the greatest Broadway-musical villain” by the popular magazine Entertainment Weekly. Lynch recently worked in a tv-series named Ridley Jones playing the character Lonny. She will soon be seen in the pilot episode of the tv-series Bucktown.

Jane Lynch was married to Lara Embry between 2010 and 2013. Lynch had met Embry in a fundraiser event. They married in 2010 after dating for some time. Neither Lynch nor Embry has released the reason for their divorce. The actress does not have any children.

The actress published her autobiography titled Happy Accidents in the year 2011. The book details information about her early life and struggle with alcoholism. Lynch was named in one of Power Up’s “10 Amazing Lesbian Women in Showbiz”.

This powerful individual has an estimated net worth of around $16 million as of 2022. The actress has earned most of her wealth thanks to her work as an actress.

She has been reported to be taking an average of $80k for a single episode in a series. There were reports of some real estate, but any detailed information about the investment isn’t available as of now.

The actress has plenty of awards up her sleeves in her long successful career in show business. Lynch won her first major award in 2003 for her role in A Mighty Wind at Florida Film Critics Circle Award.

She later went on to win 14th Satellite Awards in the Best Supporting Actress category for her work in Glee. She also won other awards like Primetime Emmy Awards, Screen Actors Guild Awards, Dorian Awards, People’s Choice Awards, as well as Golden Globe Awards for the same role in Glee.

The actress recently won Primetime Emmy Awards for her performance in The Marvelous Mrs. Maisel. To conclude, Jane Lynch has a total of 40 nominations, and 27 award wins in her career as of January of 2022.

The actress is an avid social media use which is clear from her presence on platforms like Twitter and Instagram. She often shares pictures from her daily life on Instagram. Her Twitter feed is filled with witty and funny replies to her fans and followers.

Jane is rumored to be dating Jennifer Cheney. They are reportedly quite happy with their live-in relationship but aren’t planning to get married any time soon.

Jane Lynch is indeed deaf but only on her right ear. She revealed this information in a talk show and even went on to say that the reason for her condition might be an infant fever she had.

No, Jane Lynch and Alec Baldwin aren’t related at all. It is unlikely that they are even close friends.

Jane Lynch appeared in the sitcom iCarly in 2010. She played the character named Pam Puckett, Sam Puckett’s mother in the series.