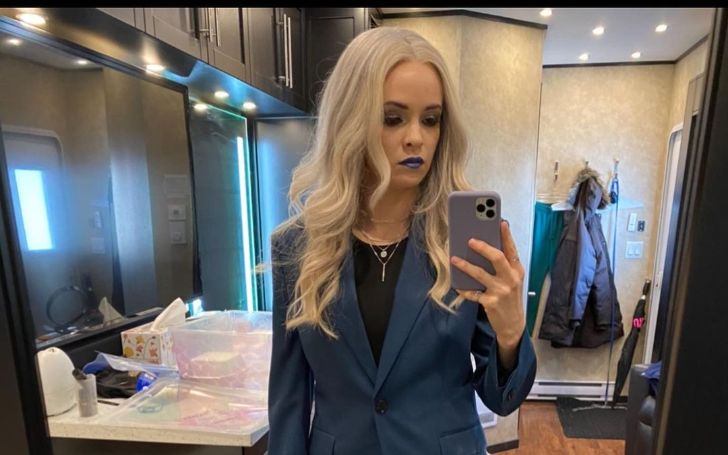 Danielle Panabaker is a well-known American actress who has appeared in films such as Mr Brooks, Friday the 13th, and The Ward. The actress is now starring in the CW superhero TV show The Flash.

Danielle made her feature film debut in 2005 with the film Sky High. Panabaker frequently appeared in minor TV roles, but her career-defining small-screen break came in 2005 when she was handed a prominent role in the series Empire Falls.

The actress landed another huge gig in 2014 when she was selected for a role in the television series Justified. The same year, Panabaker starred as Dr Caitlin Snow in the CW superhero series Arrow and its spin-off, The Flash.

Danielle Nicole Panabaker was born On September 19, 1987, in Augusta, Georgia. Panabaker is the family’s eldest daughter. The future actress was born to her father, Harold Panabaker, and her mother, Donna Panabaker.

Panabaker grew up alongside her younger sister, Kay Panabaker, who is also a well-known actress. However, none of the girls was really interested in performing when they were little.

Donna Panabaker, Danielle Panabaker’s mother, revealed in an interview that she had hoped Danielle would follow a medical profession.  Her mother also shared that both her daughters shared a love-hate relationship were unable to share toys, clothes, or even their mother’s attention.

However, as is frequently the case, Kay and Danielle became excellent friends as they got older, putting aside their earlier disputes. As a ten-year-old, Danielle went to a summer scout camp where she learned how to live in the wilderness, cook over a fire, and navigate by the stars.

The stage already enthralled the girl till now, and she could easily play the title roles in amateur performances two years later. The actress began participating in community theatre productions when she was 12 years old. She also tried out for commercials and little parts.

Danielle’s family eventually relocated to Naperville, Illinois, but the future actress did not give up her acting courses. The youngster already knew she wanted to be an actor and didn’t want to waste time. Danielle Panabaker went on to conquer Los Angeles after graduating from Neuqua Valley High School in 2003.

Her incredible figure is the consequence of a hard fitness regimen and a well-balanced diet. The actress eats more greens and less junk to keep her body healthy and her skin radiant.

The actress maintains her fitness by working out daily. She constantly changes her workout plan to achieve better outcomes. This also aids her motivation.

Danielle also revealed that she maintains herself fit, gorgeous, and healthy by eating properly and exercising. And when it comes to working out, the actress likes to experiment with different workouts like spinning, weight-training, indoor cycling, and many core-based workouts.

Danielle has lovely and luscious light brown hair and enticing brown eyes. In addition, her shoe size is 7.5 (U.S.). And, because of her healthy and active lifestyle, the actress fits wonderfully in a size 2 (U.S.) dress.

In early 2008, there were rumours that Danielle was dating an American actor, James wood. James is nearly 40 years older than the actress. Their relationship could not last, and they split up within few months.

Then at the end of 2008. Danielle briefly dated the American actor and songwriter Jesse Mccartney. During the course of their relationship, they were often spotted at nightclubs and events. But even this relationship could not last.

In 2o10, the actress got involved with the Agents of S.H.I.E.L.D  star Zachary Abel. The couple dated for five long years before parting ways in 2015.

In 2016, the actress confirmed her engagement with her then-boyfriend, Hayes Robbins. The man works as a lawyer and has no ties to the film industry.

One year later, on June 24, 2017, fans were overjoyed to learn about Danielle Panabaker’s wedding. The young woman shared an Instagram photo with her spouse, writing that it was the best moment of her life. The pair are said to live in a fancy apartment in Los Angeles.

Then in November 2019, they announced that they were expecting their first child, born in 2020.

Net Worth | How Much Does Danielle Panabaker Earn?

Danielle began her professional career at the age of 15, and since then, the actress has been. From television advertisements to television series and films, she has done it all.

The actress has been in the film industry for about 19 years, and her net worth is reported to be over $3 million. The actress’s large net worth may be attributed to series like The Flash, Empire Falls and Shark, as well as films like Mr Brooks and The crazies. However, her exact annual salary is still unknown

After appearing in lots of coveted shows, the actress has definitely earned a good lifestyle for herself. Furthermore, her brand endorsements and sponsorships add to her net worth.

Danielle feels that social media is an important aspect of an actor’s life since it helps to promote their name in the mainstream media. It’s also a great opportunity for them to stay in touch with their audiences and keep them informed. So, sure, she is involved in social media and currently has profiles on two platforms: Instagram and Twitter.