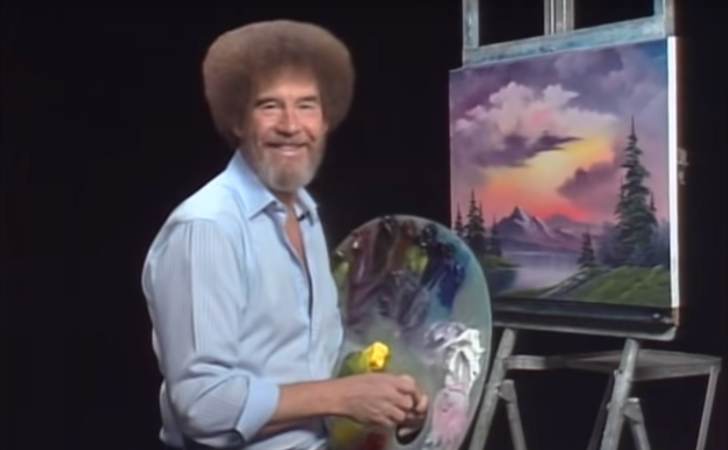 Ross later became well-known due to his posthumous internet presence. This post will go over everything about Bob Ross, including his biography, net worth, and career.

Let us begin with some basic facts:

Ross was born on October 29, 1942. His place of birth is Daytona Beach, Florida. Painter Ross’s father’s name was Jack Ross, a carpenter, and his mother’s name was Ollie Ross, a waitress. Both his parents were raised in Orlando, Florida.

Ross enjoyed animals as a child and became fond of them. He mostly tended for injured creatures, including armadillos, snakes, alligators, and squirrels. These were also included in a number of episodes of his television show The Joy of Painting.

Jim was Ross’s half-brother. In the episode, Ross primarily talked about his brother. Similarly, on his broadcast, he addressed Jim’s passing. Ross dropped out of high school while he was in the ninth grade. He lost part of his left index finger while working as a carpenter with his father, yet this did not hinder his ability to subsequently grasp a palette while painting.

Bob Ross was a nice, calm man with a great physique who even served in the military for the United States.

The painter had gorgeous brown permed hair. He was also well-known for his distinctive hairdo. Bob Ross’s beautiful halo of hair was so in sync with his kind demeanor that it almost appeared too wonderful.

Career as a painter

Ross dedicated the first episode of The Joy of Painting’s second season to Bill Alexander, saying, “Years ago, Bill taught me this amazing wet-on-wet method, and I feel as though he gave me a valuable gift, and I’d want to share that gift with you.”

Ross’s relationship with Alexander got increasingly tense as his fame rose. In 1991, Alexander told The New York Times, “He deceived me.” “I invented ‘wet on wet,’ I trained him, and… he thinks he can do it better.”

Believe me when I say that the voice of our favorite Painter, Bob Ross, is a natural insomnia cure. The way he presents his philosophical ideas with his soothing voice creates a sensation of ecstatic calm.

Furthermore, scientists have lately found “the Bob Ross effect” and stated that Ross was an unsuspecting pioneer of the brain-tingling feeling known as “ASMR” (or Auto Sensory Meridian Response”). ASMR induces blissful relaxation.

Throughout his life, Ross was married three times. Vivian Ridge was his first wife. He had one kid with his ex-wife Ridge, Robert Stephen “Steve” Ross. SOn occasion, teve, a brilliant painter, appeared on The Joy of Painting ond later became a Ross-certified instructor. Steve made an appearance in the final episode of Season 1. Ross had one additional child from a previous relationship when he was a teenager.

The marriage of Ross and Ridge ended in divorce in 1977. Ross’s infidelity supposedly caused their divorce.

Ross’s second wife’s name was Jane. There were no children born to him and Jane Ross. Jane died of cancer in 1992. Ross married Lynda Brown for the third time two months before his death in 1995.

Ross was quite private about his life and enjoyed his solitude. The 2011 PBS documentary Bob Ross: The Happy Painter includes a few interviews with his close-knit group of friends and family. Other communications were erased as part of a court settlement between Bob Ross Inc. and Ross’s family. Bob Ross Inc. guards his intellectual property.

Many views include Steve Ross from the television show The Joy of Painting with Bob Ross. Throughout ‘The Joy of Painting,’ Bob Ross referenced Steve, mentioning how his son makes a lot of money selling his paintings.

Steve Ross’s full name is Robert Stephen Ross on August 1, 1966, in the United States. Painter Steve is the son of Bob Ross, the host of The Joy of Painting (1983), and Vivian Ridge.

The Painter is 6 feet 5 inches tall, or 1.96 meters. Steve featured in 13 episodes of ‘The Joy of Painting with Bob Ross.’ The most famously in the final episode of the first season, ‘Final Reflections,’ when he assists his father by addressing viewers’ queries, Painter Ross responds.

Steve’s mother had died while he was a child. He also lost his father in 1995. Bob Ross was diagnosed with lymphoma that year, a rare and severe form of cancer with just a few months to survive.

Where is Steve Ross now?

Steve Ross is not a part of any television show, although he has lately returned to public painting.

Steve has collaborated with his father’s old friend Dana Jeser to host a session on the wet-on-wet method pioneered by Bob Ross. They, too, taught interested pupils how to produce magnificent landscape paintings using the alla-prima oil-painting technique, much like Bob.

Is Bob Ross dead? | Bob Ross Cause of Death

For most of his adult life, Bob Ross was a chain smoker. Ross anticipated dying early and had several health issues during his life.

His ashes are buried at Woodlawn Memorial Park in Gotha, Florida, behind a plaque that reads “Bob Ross; Television Artist.” Ross hid his illness from the broader public; his cancer was not discovered outside of his immediate family and friends until after he died.

According to available information, Bob Ross’s net worth is $6 million. His income and net worth are derived from his different works. Being in the military initially helped his net worth to increase. Later in life, his paintings, instructional TV presentations, and Bob Ross Inc. all contributed to the growth of his riches.

Bob, the painter, is nowhere to be found on social media platforms. He died in 1995, long before social media was introduced. He didn’t have a Facebook or a Twitter account. To keep Bob Ross’s memory alive, fans worldwide post his photographs with the hashtag #BobRoss.

Bob Ross, with his stunning and calm voice, everyone loved him. He became America’s most famous painter for his wet on wet paintings. . He was also famous for his small chit chats such as “We don’t make mistakes; we have happy accidents,”

Steve Ross is the son of Bob Ross. Steve is also a famous painter and appeared in TV shows with his father.