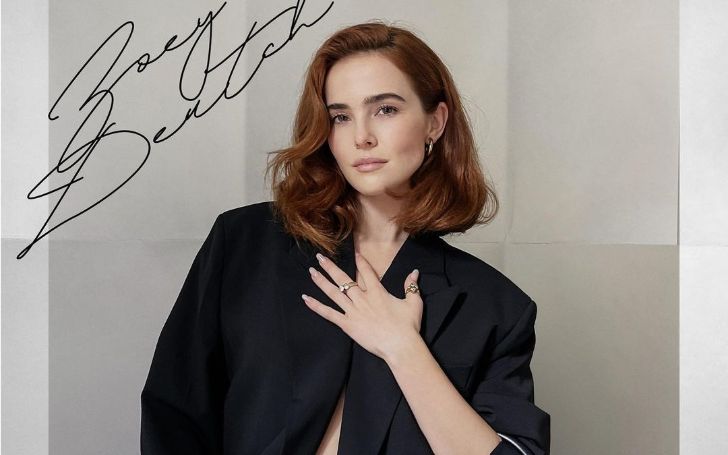 Zoey Deutch is an American model and actress who has been appearing in movies since 15. The charismatic young actress is most known for her portrayal of Rosmarie ‘Rose’ Hathway in the popular 2014 film Vampire Academy.

Zoey was born into a family of celebrities, and she, too, embraced the trend and decided to pursue a career in show business with determination and commitment and became famous in her own right. Besides her role in the cinema, Deutch is an activist, collaborating with her mother and sister to bring awareness to the water crisis.

Zoey, a successful model, has appeared in several fashion publications, including Harper’s Bazaar, Vogue, Vanity Fair, Flaunt, Cosmopolitan, and Rogue magazine. As a well-known model and actress, she is regarded as a youth symbol by millions of her fans worldwide.

Zoey Francis Thompson Deutch was born in Los Angeles, California, on November 10, 1994. She is the daughter of actress Lea Thompson and director Howard Deutch. She is of Russian-Jewish and Polish-Jewish ancestry on her father’s side and English, Scots-Irish, Swiss-German, and Irish ancestry on her mother’s side.

She was raised as Jewish and is of American Nationality. She has a sister, Madelyn Deutch, who is also one of the successful personalities from the movie business.

As a person, Zoey is very adaptable, who can easily blend into most social situations. There are no specific qualities that can create an imbalance in Zoey’s personality and life, but she strives hard and persistently cultivating her unique strengths.

As per her birthdate, 10th November 1994, Zoey is 26 years old as of 2021. Observing her physical appearance, Zoey is 5’4” tall and weighs approximately 55 kgs. She has a striking pair of hazel eyes and perfect dark brown locks.

Similarly, her shoe size is 7.5(US), and her dress size is 3(US). Furthermore, she works out almost every day to attain a perfectly proportioned body that measures 34-35-35.

Growing up amid all of these famous people, Zoey had aspirations to be in the spotlight since she was a child. She even started taking the acting class when she was five years old.

Deutch received her primary education at Oakwood School. She later enrolled in the Los Angeles County High School for the Arts, where she did a double-major in theater and visual arts. She later entered the Young Actors Space.

Zoey Deutch began her acting career at the age of 15 on the Disney Channel original series The Suite Life on Deck. She portrayed the role of Maya, the show’s protagonist Zack Martin‘s love interest. The next year, she signed on for a recurring appearance as Juliet Martin in the drama series Ringer.

Her first break in the film industry came in 2013 when she was cast in the romantic fantasy film Beautiful Creatures. The film was based on Kami Garcia and Margaret Stohl‘s original novel of the same name, and it was the first installment of the Caster Chronicles trilogy. She had a major role in the film, alongside top actors such as Thomas Mann, Emma Thompson, and Alden Ehrenreich.

Following the success of Beautiful Creatures, she was cast in the film Vampire Academy, playing the role of Rosemarie Hathaway. Her performance was critically acclaimed, and the film was a major commercial hit. Jordan Hoffman lauded her work in a ‘New York Daily News column.

Following the popularity of Vampire Academy, Zoey starred in several hit films with several well-known stars. She starred in the adult comedy Dirty Grandpa with Robert De Niro and Zac Efron, and later in Why Him? with James Franco, Bryan Cranston, and Megan Mullally.

She was then featured on the cover of the March 2014 edition of Bello magazine. A year after being on the cover of Bello, she was the cover girl for many major publications, including Cosmopolitan, Rogue magazine, and Harper’s Bazaar.

Is Zoey Deutch Dating Anyone?

In her personal life, Zoey was in a relationship with the famous actor Avan Jogia. The couple reportedly began dating in 2011 and called it quits in 2016. During the course of their relationship, they were often spotted hanging out together. However, neither of the actors confirmed their rumored romance.

Following her split with Jogia, rumors spread that Zoey is reportedly in a relationship with Dylan Hayel, the son of producer Chad Hayes and an actor himself.

How Much Does Zoey Deutch Earn?

As an actress in the film industry, Zoey makes a decent living from her acting work. According to online sources, her net worth is reported $4 million as of 2021. Her actual pay, however, has not yet been disclosed.

She is only in her twenties and has a long way to go in her career. With her undeniable talent, she should have some good movies and shows in the future, as well as an increase in her net worth. So stay tuned for more information on her and other celebrities.

Is Zoey Deutch On Social Media?

Being an artist nowadays isn’t just about acting; there are so many other aspects of it. Similarly, one of them is establishing their brand’s identity and appealing to their followers via social media.

Gone are the days when celebrities and actresses had unattainable stardom; nowadays, actors have become more relatable, and their audiences are aware of the majority of their insights.

Not only is social media necessary for actors to connect with audiences, but it is also essential for actors to obtain lucrative brand endorsements. So, at the moment, Zoey is active on two social media platforms: Instagram and Twitter.