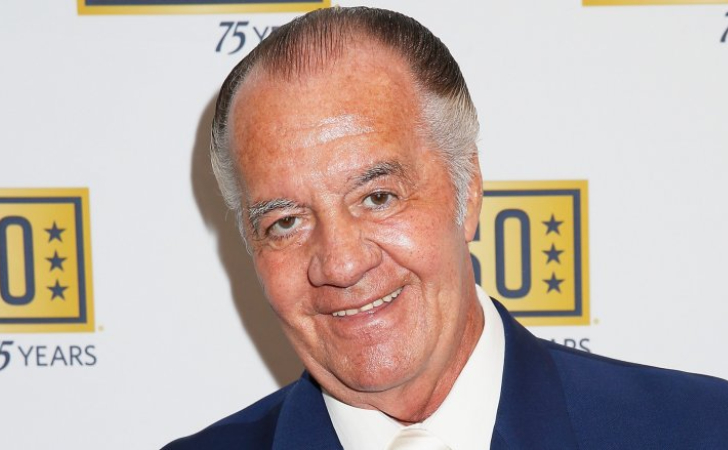 Tony Sirico best known for his role in the American crime drama series The Sopranos as “Paulie Walnuts Gualtieri” passed away at the age of 79. The Birth name of Tony Sirico was Gennaro Anthony Sirico Jr. Thus, Tony Sirico death has caused distress among fans and the whole film industry.

Tony had appeared in numerous movies and TV shows throughout his career. Similarly, he began his career with a minor role in the 1984 movie, Crazy Joe.

The popular actor of The Sopranos lost his life on the 8th of July, Friday.  The whole entertainment industry is still mourning Tony Sirico death.

Tony Sirico Cause of Death

The actor’s family and the manager Bob McGowan announced his death on social media on 8th July 2022. Likewise, the sudden demise of the actor has left the whole entertainment industry in shock. McGowan stated that the actor passed away on Friday morning.

However, the real reason behind his death is still not disclosed to the public. Sirico had been living in an assisted living facility in Florida. The living facility was exactly located in Fort Lauderdale, Florida. Similarly, he was found dead in the same facility.

Moreover, Tony was diagnosed with dementia some years before his death. He started living in the assisted living facility after his health was going at the risk. His family and close friends expressed their condolences and prayers through social media.

One of the co-actor, Michael Imperioli from The Sopranos expressed his remorse via Instagram. Imperioli posted a picture of him and Tony Sirico with a heartfelt caption:

“It pains me to say that my dear friend, colleague, and partner in crime, the great TONY SIRICO has passed away today. Tony was like no one else: he was as tough, as loyal, and as big-hearted as anyone I’ve ever known. I was at his side through so much: through good times and bad. But mostly good. And we had a lot of laughs. We found a groove as Christopher and Paulie and I am proud to say I did a lot of my best and most fun work with my dear pal Tony. I will miss him forever. He is truly irreplaceable. I send love to his family, friends, and his many many fans. He was beloved and will never be forgotten. Heartbroken today”.

Sirico started his career in 1974. He starred in a movie named Crazy Zoe in a minor role. First time in his life he was coached by Michael Gazzo. He played in more than 45 films.

Apart from these, he is also a voice actor. He voice-acted for a character in an animated sitcom, Family Guy. Sirico also appeared in a bunch of TV shows. A few of them are Kojak, Witness to the Mob, Vig, Police Squad, etc.

However, among all of them, his most renowned role is of Paul Gualtieri in the HBO crime drama series The Sopranos. The most recent movie that appeared was Sarah Q where he played the role of Mr. Danny. Sarah Q was released in 2018.

Therefore, there are two more movies in a production starring Tony Sirico whose release date is yet to be fixed. Respect the Jux and Super Athlete are his two upcoming movies. We are not so sure if the audience sees Tony in these upcoming movies.

Tony Sirico| Net Worth and Income

Besides acting, Tony also earned wealth through other endeavors like endorsements and businesses. However, detailed information about his net worth and income is hidden from the public eye.

Tony Sirico was born on 29th July 1942 in New York City, United States. He was born to his father Gennaro Anthony Sirico Sr and his mother Marie Sirico. Sirico was brought up in Brooklyn by his mother. Likewise, Sirico lived with his mother for the majority of his life.

Tony Sirico was a handsome man until the time of his death. His positive attitude and pleasant smile are something that tends to win the hearts of people.

Tony Sirico death has brought the world down on people. At the time of his death, he was 79 years old, so close to hitting the 80 years mark.

His height of Tony reads 6’2″ with his body weight being 92 kgs. As age got better of the actor, he didn’t care much about his looks and personality. There is hardly any information about the dress and size of the shoe for the man.

During the prime of the actor, Tony used to spend a lot of his time in the gym hitting the weights. He had black color eyes along with hair of the same color. Tony Sirico death has created an unfulfilling hole in the acting world.

The late actor was married. His wife’s identity is perfectly hidden from the limelight. The couple had two children; a son and a daughter. Their son’s name is Richard Sirico and his daughter’s name is Joanne Sirico.

Tony Sirico is not active on any social media platforms. Tony may not be interested in social networks because of his growing age and worsening health. As a result, Tony’s pictures are available on google taken by Paparazzi.

Tony was a real-life criminal who got arrested 28 times for assault, robbery along with misconduct. He also served two prison terms. His first arrest was at the age of 7.

At that time, he stole nickels from a newspaper stand. In 1967, he was found guilty of robbing an after-hours club in Brooklyn. That was when he served in prison for 13 months.

Likewise, he was spotted with a revolver in a restaurant. Consequently, he was arrested. In 1971, he served 20 months in “Sing Sing” prison for four years of conviction.

Thus, he was arrested for unlawful weapon possession, coercion, and extortion. Eventually, Tony was impacted by that jail time massively. He started to concentrate on his acting career.