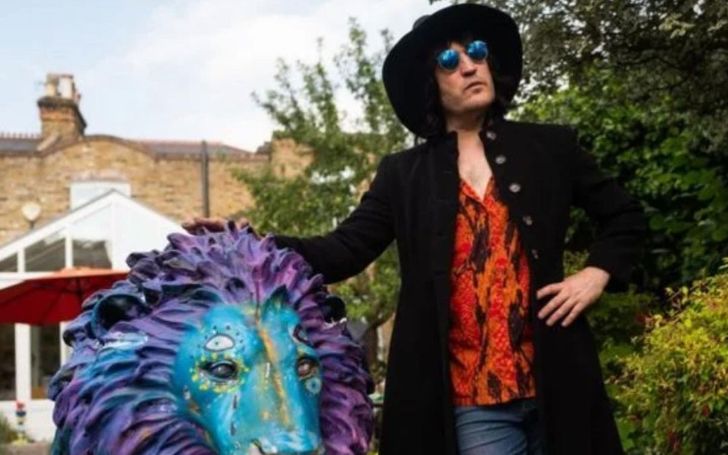 Noel Fielding is a British writer, comedian, artist, actor, and musician. The actor has worked extensively with the BBC and has appeared for numerous shows.

He has also worked as a host on several shows like British Bake Off. However, Fielding is most prominently known for his comedic work.

Thanks to this work style, he is famous for presenting dark jokes and has garnered a cult following. Noel Fielding is a multi-talented personality and has collaborated with numerous other artists in his career.

He tried hands in almost all the forms of arts. Fielding started his career in stand-up comedy during the 1990s and is now one of the most successful personalities in the comedy scene in England.

He was also seen in the popular tv show The IT Crowd, where he played the role of a character named Richmond Avenal. Let’s learn some quick facts about Noel Fielding:

Noel Fielding was born to Ray Fielding and Yvonne Fagan in London. His father was a manager at the Royal Mail.

Fielding’s parents had him while they were still in their teenage years. This affected Fielding adversely as their parents would have a lot of night parties, and he often had to step over their sleeping friends in the mornings.

His parents separated within a few years, and his grandmother mostly raised him. When Fielding was three, his father, Ray Fielding, remarried Dianne Fielding.

After the death of his mother, his step-mother Dian got involved in parenting. Fielding went to Croydon School of Art, where he completed his preliminary education.

He later went to Buckinghamshire New University, where he studied Graphic Design and Advertising and graduated in 1995. He met many of his future lifelong friends as well as collaborators like Dave Brown, Nigel Coan, Julian Barratt, et cetera during his time in college.

Born on the 21st of May in 1973, Noel Fielding’s age is 49 years as of 2021. He started getting active in the entertainment business during the mid-90s and has since then skyrocketed in popularity.

Fielding is popular for his unique and dark analogies in his work, including comedy. Noel had a difficult upbringing because of complicated family relations.

Fielding stands at a height of 5 ft 11 inches and weighs around 94kgs. The actor often flaunts gothic-style makeup and stands out in the crowd of his fellow comedians. He has blue eyes and dark black hair.

Noel Fielding is most popular for his comedic work. He began his journey in the world of comedy during the 90s with the help and motivation of his friend Julian Barratt.

Almost all of his writings have a touch of his comedic style which the audiences admire. Fielding planned to tour across England in 2010, but it ended up getting canceled in the last months as he was trying to focus more of his time writing The Mighty Boosh.

Noel Fielding’s first known public relationship was with singer Dee Plume who is a vocalist in the band Robots in Disguise. They soon broke up, and Fielding began dating RJ Lliana Bird during the early 2010s.

Fielding has since then been in a committed relationship with Lliana Bird. The couple had their first child in 2018 and later second in 2020.

As per his interviews, Noel had contracted hepatitis while he was in university. His friends helped him take preventive measures and now live a healthy life after treatment.

Talking about his relationship with his work, Noel is a method actor and takes great pride in preparing for every one of his acting roles.

Noel Fielding has an estimated net worth of around $6 million as per online reports. Most of his wealth comes from his work as a comedian and actor. He has also produced a few shows of his own.

Although the actor has probably made some investments, there aren’t any specific details available about his investments as of yet.

However, we are well aware that this man is living a lavish lifestyle along with his friends and family. Most of the time he is spotted in some of the fanciest places around him.

Moreover, he loves taking pictures of what he is doing and sharing them with his fans. That may be the reason why he has garnered millions of fans all over the world.

No, Noel Fielding is not married as of yet. But he has been in a committed relationship with his partner Lliana Bird for more than ten years now. They began dating in the early months of 2010 and have two children.

No, there isn’t any specific illness that he is suffering from. He was unwell recently during the last months of 2021, but he didn’t reveal any details about it.

There were reports that Noel Fielding is a vegan, but they turned out to be false. He did give the idea about the Vegan Week challenge on The Great British Bake Off so that it would tune in with the millennial audiences, which turned out to be successful.

It does seem to be the truth. Before his relationship with Dee Plume, Noel Fielding was reportedly dating singer Bob Geldof’s daughter Pixie, who was just sixteen years old, whereas Noel Fielding was in his early 30s.

Noel Fielding has two children of his own, both daughters. His first daughter Dali was born in 2018, whereas his second daughter Iggy was born in 2020.