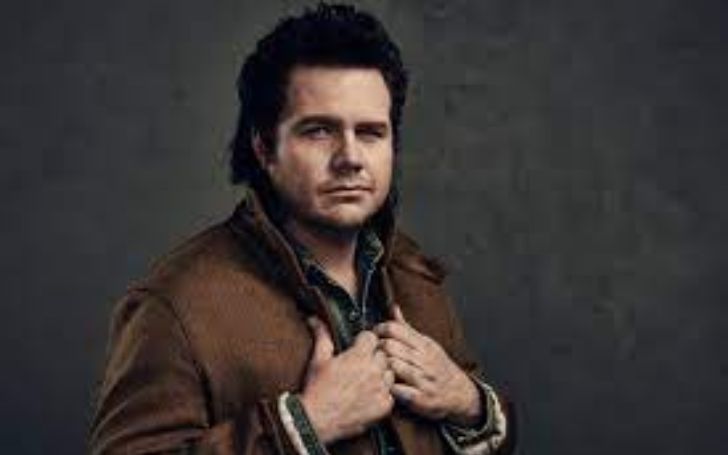 Josh McDermitt is a celebrated American actor and a stand-up comedian. His career in the entertainment industry was quite fortuitous. The actor made anonymous calls to Tim & Willy, a local radio show in Phoenix when he was studying Criminal Justice.

That one call made him realize his true hidden talent and now he is famous more than ever. Soon he started working as a producer for the local radio show and stepped into the world of entertainment. Besides acting and comedy, he is also a hot air balloon pilot.

Josh has made numerous appearances in movies as well as television. He is widely known for his roles in the American Post-Apocalyptic Horror Tv Series ‘The Walking Dead’. Even more, he made his name for being one of the contestants on the American reality television competition show ‘Last Comic Standing.’

In-depth, let’s look into McDermitt’s age, net worth, dating life, lifestyle, and personality. Before that let’s take a glance at some quick facts;

Josh McDermitt was born to Judith McDermitt and Michael McDermitt. The actor grew up in Phoenix, the capital city of the beautiful Arizona state in the USA. He later moved to Los Angeles.  His father is Portuguese, while his mother is Dutch.

This man is very private in terms of his family’s exposure in the media. But, according to different sources, he has five siblings. In one of his media appearances, he also stated that he channeled one of his siblings – brother Zack in The Walking Dead to play Eugene Porter.

What is Josh McDermitt’s Ethnicity?

McDermitt is Multi-Ethnic (Portuguese and Dutch). He follows the Christianity religion, so do his parents. In one of his interviews, he said,

“My dad was adopted. He is Puerto Rican. So McDermitt is an adopted name, but I have Dutch ancestry from my mom’s side, so I look like her. But what’s funny is that in Phoenix, where I am from, my dad grew up in a barrio and is very entrenched in the Mexican culture even though he has Portuguese heritage. He considers himself Mexican”.

Josh McDermitt, the versatile entertainer, was born on June 4th, 1978, and is 43 years of age in 2021. Even though he is in his early 40s, he still has an erratic enthusiasm towards his work and passion. Josh was born under the sun sign of Gemini.

As per this sign, McDermit is a bit lazy but when it comes to working on his choice, he tends to be very energetic. That might be the reason why he has been receiving a lot of projects lately.

McDermitt is an entertainment personality who stands at a towering height of 6 feet tall (1.83 m). considering his appearance and necessary factor Josh weighs about 85 kg in general.

Due to his heavyweight, this man was often criticized by the people around him whether it be his family, friends, or fans. therefore he decided to lose a significant amount of his weight.

Despite the fact that his weight loss journey was tough Josh made his mind and kept striving to do better. Finally, he lost weight and fans were stunned to see his new look.

Although his journey to weight loss is imaginable, McDermitt has not revealed his secret mantra to garner that look. However, it is apparent that his dedication and hard work has paid off and motivated his fan to choose a healthy lifestyle.

The distinct feature of this handsome is his beard and cheeky smile. As a matter of fact, he is blessed to have blue eyes and short dark brown hair.

There is no denying that the comedian is a handsome man and captivates a lot of attention equally from the fans and his co-star. Although he has good looks and a spectacular sense of humor, none of the girls or women ha been able to grab his eyes.

That might be the main reason why Josh is never linked or rumored to be seeing or dating hot actresses and models in the entertainment industry. Josh McDermitt has never gone public about his relationship. Therefore, it is not known if he’s married, single, or divorced.

However, this actor is so famous that we believe if anything was cooking up in his life. He has also never been linked to anybody in the entertainment industry though there was a rumor that he might be gay for a while. Josh denied the speculations of him being gay in his interviews.

This handsome man has worked on numerous projects but earned the most of his assets from The Walking Dead. He has a total net worth of $4 million as of 2021 records. He also earns money from stand-up comedy.

Josh also owns stock in the Green Bay Packers. It is apparent that his investment outside of his work helps him to make more money.

Josh McDermitt quit social media in 2017 in the wake of threats from the fans of the show The Walking Dead. Surprisingly the fans could not comprehend his character Eugene siding with the evil Negan.

In an interview, McDermitt termed social media as a ‘dark and negative’ place. He further said,

“I am not going to get into that too much. I just know that the internet is just kind of a dark and negative place, which breeds that mentality and those sorts of thoughts. It’s just unfortunate.”

Some Interesting Facts about Josh McDermitt

Some Frequently asked questions about McDermitt

He is Multi-ethnic. His father is of Portuguese ethnicity, and his mother is of Dutch ethnicity.

Due to his private life being out of the media’s eyes, many speculated he is gay, but he has denied it.

Apart from acting, McDermitt has successfully worked as a stand-up comedian.