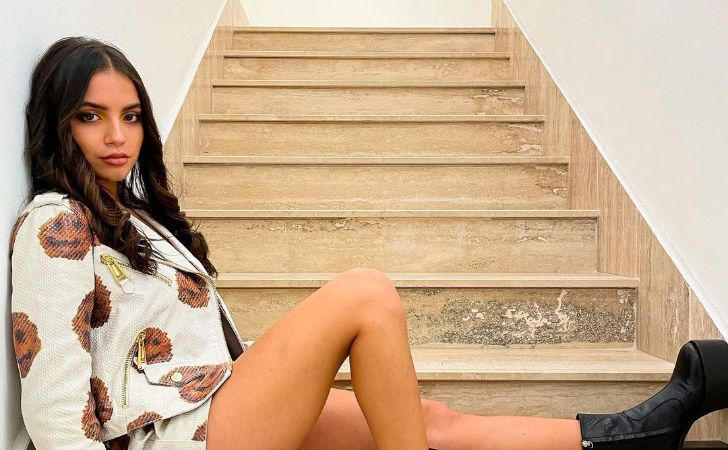 Isabela Moner is an American actress, musician, and model. She has mostly worked as an actor for around a decade now.  She was seen playing the role of a character named Izabella in the popular movie Transformers: The Last Knight.

Moner has also worked in a few works which have been released on Netflix. Apart from working as an actor, her music career has also been growing for some time now.

Isabela Moner has recently started focusing on her musical career. She has performed and released many popular songs in recent times. Talking about her movie career, she has worked with popular actors like Shia LaBeouf, Mark Wahlberg, Rose Byrne, et cetera.

Before entering Hollywood, Moner was already popular voicing various cartoon characters at Nickelodeon. The actress has come quite a far way from her early years now.

Speaking about her age, Isabela Moner is 20 years old as of 2021. The actress was born on the 10th of July in the year 2001. Moner has been acting from quite a young age. Her first work as an actress in front of a camera was in 2012 in a movie named The House That Jack Built.

Isabela Moner stands at a height of 5 ft 2 inches and weighs around 50 kgs. The actress has kept her health quite well. Moner has dark brown hair and light brown eyes. She is one of the few child actresses who have healthy relationships with her fans as an adult now.

Isabela Moner was born in Ohio to Katherine Moner and Patrick Moner. Her mother Katherine Moner is originally from Peru and settled in America where she met her husband.

Moner’s father Patrick Moner was born in America and has worked as a musician. He is quite skilled in playing musical instruments like Guitar and piano. Isabela Moner completed her early studies from a high school in her hometown and got accepted into college at the young age of 15.

Her journey into the world of acting started in her early teenage years. She began taking acting as her dream after being inspired by actress Judy Garland’s work.

She also performed in some local theaters during this period. Moner got to play the role of a character named Munchkin in the local adaptation of the popular story The Wizard of Oz after auditioning for the role.

Moner has had an innate talent for acting from a young age. She started acting from theaters and became quite apt in the scene. Moner debuted from a play named Evita which was performed in her hometown.

She starred in tv-series 100 Things to Do Before High School in 2014 and worked on the show for two years playing a character named CJ Martin.

Her biggest work by far has been working as a voice actress for a popular character named Kate in Dora the Explorer. Moner again took up the role of Kate in the spin-off named Dora and Friends: Into the City.

Soon, she was cast as character Lori Collins in a movie produced by Nickelodeon named Splitting Adam. Some other animated originals she has worked on include Legends of the Hidden Temple and The Nut Job 2: Nutty by Nature.

The actress has recently ventured into Hollywood and has worked with big stars. Her first major movie was Transformers: The Last Knight where she had a small but important role.

The actress starred in the live-action adaptation of the Dora The Explorer which did not perform as expected. Nevertheless, her fame skyrocketed after her role in the movie.

In recent times, she has also released a few singles marking her entry into the world of music. Her first single named Papi went on to do well with her listeners. Moner has since then released her own EP named The Better Half of Me. It was in the Billboard Top 15 of Peruvian artists in 2020.

Isabela Moner has recently changed her stage name and now goes by Isabela Merced. She has said that the change was necessary and it means a great deal to her. The actress mostly stays out of unwanted public attention and appreciates others respecting her privacy.

Moner has never revealed any details about her romantic relationship and is not married as of yet. There were rumors floating around that the actress was dating actor Dylan Summerall. But there aren’t any verifiable sources to prove their relationship.

Isabela Moner won her first major award in 2016 when she won Best Young Actor at Imagen Awards. The actress was awarded for her work in 100 Things to Do Before High School.

In 2016, she won the Rising Star of the Year at CinemaCon Award for her work in the movie Herself. The actress later went on to win the Best Leading Young Actress at Young Entertainers award in 2019 for her work in Instant Family.

Although the actress is yet to rise to her potential, Moner already has an estimated net worth of around $3 million as of 2022. Moner has earned most of her wealth from her work as an actress. She has also made some money from her music revenue.

The actress is quite active on almost all of the major social media platforms. She has garnered hundreds of thousands of followers with her presence and content on the platforms.

The actress mostly uses her Instagram and Twitter to interact with her fans and followers. But she is most active on her TikTok account where she can be seen posting short and entertaining TikToks of her goofing around.

Her presence and viewership have recently exploded and around 4.6m total likes on her account.

No, Isabela Moner has not married yet and hasn’t even revealed details about her romantic relationship. Guess the actress is busy working on her career and is not worrying too much about finding a soul mate.

As a matter of fact, the actress was accepted into college when she was just 15 which clearly shows her dedication to education. But it is not known if she has graduated or not.

Yes, Isabela Moner is indeed quite fluent in Spanish. Adding further, her first language was actually Spanish, and only became fluent in English when she started going to college. Her language could be the reason, she has an intricate affinity towards her mother’s birthplace Peru.