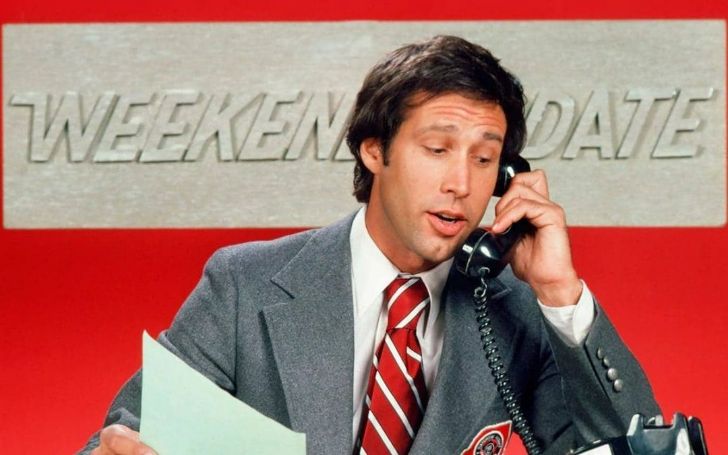 Chase started in the late 1960s and has continuously worked on hundreds of movies and TV series. He has been a regular star in the popular tv show Saturday Night Live and is quite popular for caricatures.

This actor has also been involved in a couple of radio shows. Apart from working as an actor and comedian, Chase also has quite a bit of experience in writing.

He has written for multiple episodes of Saturday Night Live during the 70s. Chase is often cited for his praiseworthy work in the movie National Lampoon’s Vacation.

His portrayal of Clark W. Griswold is loved by both the critics as well as the public. The actor has won several awards throughout his career.

Let’s learn some quick facts about his life:

Chevy Chase was part of an underground comedy ensemble known as Channel One in 1967. In 1970, Chase, who had some experience in writing, wrote for a tv show named Smothers Brothers.

He also worked as a writer for a radio show named The National Lampoon Radio Hour. Chevy Chase got his first successful gig as a performer and actor in the tv show SNL in 1975.

He was one of the first cast members of the show. Chase was especially known for his physical comedy. He also did an excellent caricature of the former President Ford, with who he later became friends.

His style later became a staple and was an inspiration for the emergence of other shows like The Colbert Report and The Daily Show. He left the show in 1976 but did appear every now and then in cameos.

Chase portrayed the character of a pedestrian in a short movie named Walk… Don’t Walk in 1968, marking an entry as an actor.

Chevy is quite agile even in his 70s. The actor stands at a height of 6ft 3 inches and weighs around 78kgs. He has gray and dark brown eyes.

Chevy Chase was born in New York to Edward Tinsley Chase and Catherine Parker. His father, Edward Chase, was a book editor as well as a writer.

Talking about his mother, Cathalene Parker, she was a musician with expertise in piano. Chase is the grandson of famous artist and painter Edward Leigh Chase, who is known for his watercolor works.

He has several relatives who have worked as and held influential positions in American history. His adoptive grandfather Cornelius was an American explorer as well as a philanthropist.

He later enrolled at Haverford College, from which he transferred to Bard College for studying pre-medicals. But he did continue his medical studies after pre-medicals. This marks the end of his formal education.

The actor has won numerous awards in his long career in show business. Chase has won three Primetime Emmy Awards to date, winning his first in 1976 for his work in SNL.

The actor got his walk of fame in the year 1993 on Hollywood Boulevard. He received Golden Derby Awards for his role in a tv show named Community in 2012.

Chase also got TV Guide Awards for the same role in 2012.

The actor has been married thrice and is currently living with his third wife. His first marriage was with Suzanne Hewitt in 1973.

He moved to LA with his wife, because of which he left the show SNL in 1976. Unfortunately, the couple got divorced the same year.

His second marriage was with Jacqueline Carline, whom he married in 1976, which ended in divorce in 1980. He is currently married to his third wife, Jayni Luke, and now lives in New York.

Chevy Chase and Jayni Luke married on the 19th of June in 1982. The actor has three children from his relationship with Jayni Luke.

Talking about his views, he is vocal about his ideas and has staunch liberal views. He has even gone on to raise money for former President Bill Clinton.

In the year 1978, Chase was involved in a fistfight with comedian Bill Murray. The fight reportedly began after Murray remarked on his then relationship with Jayni Luke.

Many of his friends and other cast members of SNL were present during the fight. Both Chevy Chase and Bill Murray later resolved their issues and even went on to star together in the hit movie Caddyshack.

Chevy Chase has an estimated net worth of around $50 million. The actor has made most of his wealth working as an actor and a comedian.

During the 80s, Chase reportedly received a whopping $7 million per movie, which is equivalent to $15 million in 2022 after adjusting inflation.

The reason for his high price was the success his movies got during this period.

This hard-working and diligent man is active on social media platforms. Among all he seems to active in Instagram, You can follow him on the link below;

Chevy Chase’s real name is Cornelius Crane Chase. He got his first name, “Chevy,” from an English ballad named “The Ballad of Chevy Chase.” It was given to him by his grandmother.

Chevy Chase is quite rich and has an estimated net worth of around $50 million. The actor earned most of his wealth from his work as an actor.

Yes, Chevy Chase and Paul Simon are actually great friends. They have been friends for more than four decades now. They met for the first time during their time in SNL.