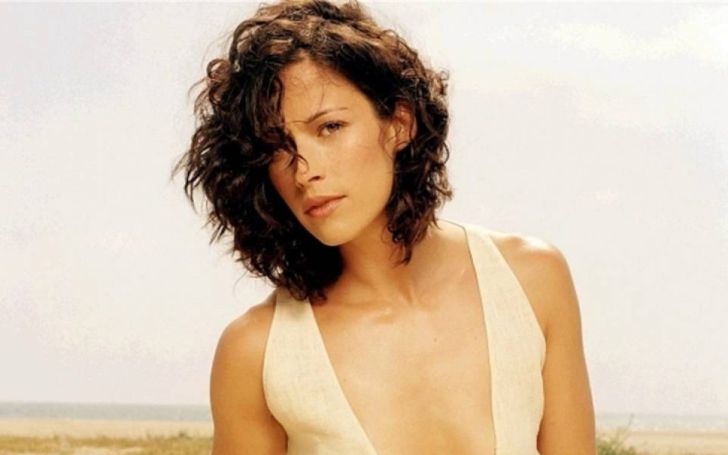 “Simple formula for being an actor: prove you’re creative enough to get the job, sane enough to keep the job, and hungry enough to give up everything else to keep them happy.” –Brooke Langton

True to her words, she has been working hard to become one of the successful personas in the entertainment industry. She is a well-recognized American actress who has been a part of the hit soap opera Melrose Place, the first stepping stone towards her successful career.

Throughout her career, she has been part of several famous movies, tv shows and occasionally appears on some music videos. This beauty has also worked with the legendary actor Charlie Sheen in “Terminal Velocity.”

Though the actress has been famous for her music videos, she is highly undervalued for her acting abilities. Her films have not done amazing from a commercial perspective, but they earned her a cult following.

Actress Brooke was born on November 27, 1970, in Arizona, United States. Her father, Jackson Langton, was a geologist. Likewise, the mother worked as a surgical nurse. She also has an aunt Sally Spalding who worked as a script supervisor and is her inspiration to join the entertainment industry.

The actress’s grandfather had served as a bomber pilot in World War II. Brooke moved to Illinois from Arizona at a very young age. A few years later, her family moved to Texas, and then she again migrated to Portland, Oregon. The actress grew an interest in theatre and acting in Portland.

Brooke Langton has grown into a very good family. As a result of that, all of her needs have been fulfilled with ease. Not only that she is pretty close with her parents and also the grandparents. The interest for acting came to her from the family members.

She was also motivated to complete her studies in science following her parents’ path. Therefore, she studied hard and became a very well-read personality. As a youth, she was intrigued and fascinated by marine biology.

Brooke did her schooling at Herscher High School and L.D. Bell High School. She was also keenly interested in Marine Biology. Langton completed her graduation from San Diego State University.

After her graduation, the Melrose Place actress went to Japan and worked as a model for a few years. During her stay in Japan, the actress got indulged in drugs due to loneliness and homesickness. She was in substance abuse for more than three years before she opted for treatment and eventually recovered.

Brooke Langton, the beautiful face of the entertainment industry, was born on November 27, 1970. She is 51 years old and has aged like a fine wine. Although this lady is in her 50s, she looks as beautiful and young as she did in her youth.

Today, she still holds the same ethics and dignity towards her work and is fully dedicated to her profession. The beautiful actress stands tall at the height of 5’5″ and weighs 53 kgs. The actress has always stayed fit throughout her life and follows a strict diet, and prioritizes her health to the fullest.

Brooke has beautiful Hazel eyes and dark brown hair, which compliments her personality and makes it even more intimidating. The fit actress has a body measurement of 34-24-35 inches. What’s sad is the fact that there is no proper data on the shoe size. However, there is proper information that her dress size is 6 along with the bra size being 34B.

Langton has not been quite vocal about her personal life. In the late 90s, Brooke had lots of flings and affairs, but the most famous one was her link up with David Chokachi. Reportedly, they met through work and fell in love.

Nonetheless, the couple fell out, and the reason is yet to be known. After her breakup with David, Brooke allegedly dates the man of everyone’s dreams, George Clooney.

Langton was also linked up with world-famous Golf-player Tiger Woods, CEO of Nett solutions Carl Hagmaier, during her acting career.

Brooke also has a baby son named Zen, who was born in 2016. The father of the baby is not disclosed at the moment. Fans speculate that the father may be an outsider of the entertainment industry and prefer to remain out of the public eye.

Brooke Langton has always clearly identified as a straight person. She has many fans from different sexual identities who are in love with her, given her charming and beautiful appearance.

The lack of a name regarding the father of Zen is surprising at times. But we tend to understand that she loves to keep the information silent. One thing however can be said with ease that Brooke has not been attached to any other man publicly to this point which is understandable. She is career-focused.

Brooke Langton’s net worth is estimated to be $2 million. The yearly salary is yet to be known. The fact that she is still in the entertainment industry signifies that her net worth is increasing.

She is an elite model in Asia and hence is the brand ambassador of most Asian Products, which adds to her net worth. Langton has been working in the entertainment industry for a very long time.

Along with acting in TV shows and movies, she has done brand promotions along with photoshoots. This has helped the net worth of the diva to go much higher. In recent times, she has been able to work less. Still, the net worth tends to rise to uncountable numbers at times.

When we talk about earnings of Brooke she tends to make $30k per episode in her acting work. Other than that her achievements from her advertising work result in $100k annually which is pretty good.

What’s interesting is the fact that she has not talked about the assets owned to this point. Be it the mansions, cars, and also the villas, the actress has decided to remain silent. With works on regular intervals, one can say that her net worth will only help her to add up the assets count.

Brooke is not on Facebook and Twitter. The actress keeps her personal life very private, but she is on Instagram. Furthermore, she is not hat much active in social media.

In one of her interviews, she said, “I would love to go on the internet and respond, but I have never had less time in my life.” She likes to stay away from the trolls on social media and not react to how the trollers want her to.

Brooke has Swedish descent, but she was born and bought up in America.

It is not yet confirmed, but she is considered unmarried.

Yes, they both were rumored to be dating.

According to various articles, Brooke is of Swedish descent and is of the white race. Further information is not yet available about her ethnicity.