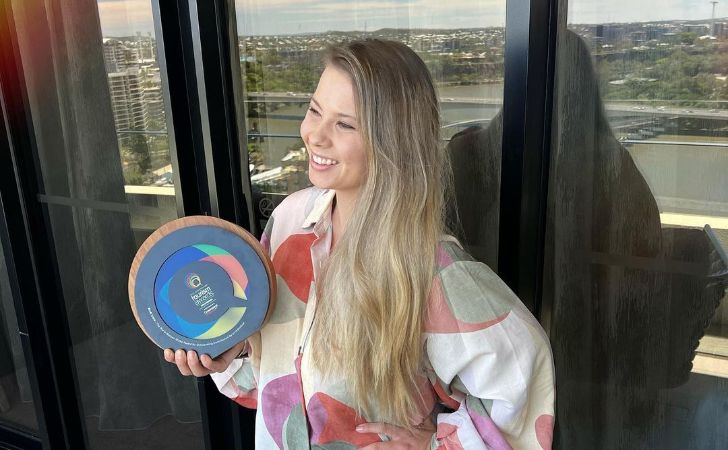 When Irwin was only 9 years old, she hosted Bindi the Jungle Girl, which is a children’s wildlife documentary TV series. Irwin is also involved in other extracurricular such as acting, singing, dancing, game show hosting and has also created two instructional fitness DVDs.

Irwin is also super popular for winning season 21 of Dancing with the Stars (US) and currently, is seen alongside her mother and her younger brother in Crikey! It’s the Irwins.

Since Bindi is really famous she has lots of fans. If you are one of the fans then you can check out some quick facts about Bindi in the table below:

Who are Bindi Irwin’s parents?

Bindi Sue Irwin was born in Buderim, Queensland a place in Australia. Her first name, Bindi comes from her father’s favorite female crocodile from the Australian Zoo which also means ‘young girl’.

Her middle name, Sue comes from her family’s late dog named Sui who died in her sleep because of Cancer in the year 2004, June 23.

Bindi Irwin is the eldest child among the two children of the late conservationist and also a popular television personality named Steve Irwin and his conservationist wife, Terri Irwin, currently the owner of the Australian Zoo.

Bindi’s younger brother, Robert is a good and a very popular photographer and also a television personality. The naturalist and herpetologist, Bob Irwin is the grandfather of Bindi Irwin.

Bindi Irwin began to appear on different television shows when she was as early as two years old, she also started appearing more in her father’s television shows, which includes The Crocodile Hunter Diaries, and also in the year 2002 film called The Wiggles: Wiggly Safari in a credited cast role.

Bindi is of English, Irish and Swedish ancestry. She also has dual citizenship (Australian and American). Unfortunately, Bindi Irwin lost her father to death when she was only eight years old.

Her father was killed by a stingray barb when he was filming the documentary Ocean’s Deadliest.

In the year 2006, September 20, Irwin received a huge standing ovation after she delivered the eulogy for her father which she wrote herself apart from some assistance with typing.

The beautiful Bindi Irwin stands at the height of 5ft. 2 inches and weighs around 54 kg. Bindi is 23 years old as she was born on 24 July 1998. Bindi has a slim figure which makes her more beautiful and bolder. As Bindi was always on television from a very early age, she has taken proper care of her body.

Bindi Irwin has brown color eyes and her hair color is blonde.

Bindi Irwin has really been a very active television personality and conservationist since a very young age. Bindi Irwin was the presenter, herself of the Bindi the Jungle Girl, which is actually a 26-part wildlife documentary kids show called by the production of the television network called Discovery Kids.

Bindi’s father, Steven was filmed in many of the early shows before his death in the year 2006 September, when production was for some moment and to put on hold Bindi Irwin and her dear mother, Terri made an announcement that she would continue her late father’s conservation and television work.

The series then premiered in the year 2007 June on the channel called Discovery Kids, with papers reporting that Steve Irwin had always supported his daughter’s career, by saying that “I just want to be co-star to my daughter”.

Bindi Irwin gives her 10% wages to the Wildlife Warriors, which is a charity was founded by her family in the year 2002.

Then she tributed the song called “Trouble in the Jungle” to her late father Steve also named “My Daddy the Crocodile Hunter“.

Bindi then released two of her more fitness DVDs for children and even sang “Trouble in the Jungle” on the show called The Today Show with The Crocmen in the year November 2007.

At a very young age this wildlife admirer had already learned to play piano after that, she released her second album called Bindi Kid Fitness 2 Jungle Dance Party in the year 2008, 11 October. Bindi also originally founded a band and then named it “Bindi and The Crocmen“.

Appearances in other media

At a very young age of 8, Bindi also appeared on the cover of the Australian magazine New Idea. She was also the youngest person to have done in the magazine of 104-year history.

During the month of June, she also hosted a US television for her father called My Daddy the Crocodile Hunter. Bindi also appeared in the Ellen DeGeneres Show in the early year of 2007.

She also appeared on Larry King Live, where she also said that creative writing was actually her favorite subject. Bindi loved being homeschooled as she and her teacher were pretty good friends.

In the late year 2007 November, Bindi also appeared with her mother in the 81st Annual Macy’s Thanksgiving Day Parade and also sang songs from her album which she named ‘Trouble in the Jungle with the Crocmen on a jungle animal float’.

Bindi also got starred as Kirra in the movie named Free Willy: Escape from Pirate’s Cove, which was released on 23 March in the year 2010. Bindi even hosted a wild-life game show called Bindi’s Bootcamp where the contestants were put through the adventure challenges. This amazing show was hosted in the year 2012 at the Australia Zoo.

Bindi also got starred in the sequel to Nim’s Island playing the lead role called, Nim which was played by Abigail Breslin at the beginning. Also in the year 2012, she appeared as Sunday Clovers on the episode “Mirror rorriM” of the Canadian television series named, My Babysitter’s a Vampire.

In the year 2014 March, she appeared on Good Morning America with her family to announce her partnership with an animal theme park company called SeaWorld.

Bindi also appeared as a guest judge during week 7 of Australian Dancing with the Stars in season 16 which happened in 2019.

In the year 2008 May 4, Bindi Irwin won the title of the Most Popular New Female Talent Logie Award. Also, on 13 June in the year 2008, when she was only nine years old, she even became the youngest performer ever to win a Daytime Emmy Award for “Outstanding Performer in a Children’s Series“.

The previous record of winning the Daytime Emmy Award was achieved by Camryn Grimes, as she had won the title of “Outstanding Younger Actress in a Drama Series” when Grimes was only ten years old for her amazing performance in The Young and the Restless.

In the year October 2014, Bindi Irwin again won the title of the Young Conservationist of the Year by the Australian Geographic Society.

The multi-talented woman is married. She is married to an American professional wakeboarder and also a member of staff at Australian Zoo, Chandler Powell.

They first met as a teenager in the Australian Zoo and tied a knot in the year 2020, March 25 in a private ceremony at Australia Zoo. They both have a very beautiful daughter born in the year 2021, 25 March on their first wedding anniversary. She named her daughter Grace.

The wildlife lover Irwin is actually a very popular personality worldwide. She has a lot of fans following her and her footsteps, which is really a huge achievement at such a young age.

Moreover, the diva is the idol of a lot of people. She has inspired thousands and many people really look up to her.

Bindi Irwin has a net worth of approximately $3 million as of 2022.