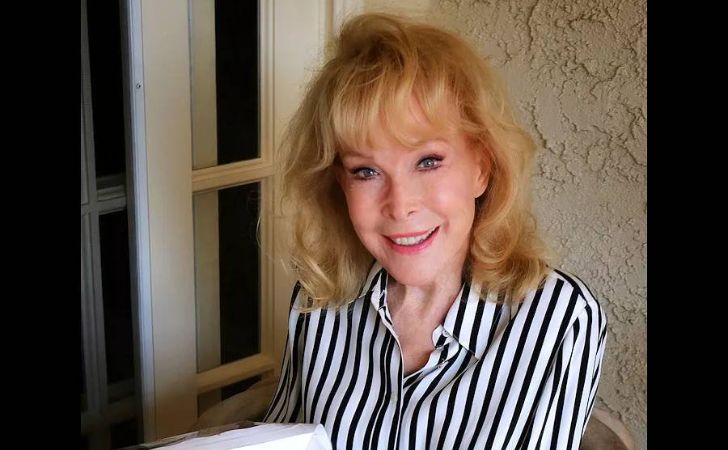 Barbara Eden is an American actress and tv star. She has been active in the world of cinema for more than five decades now. The actress is known for her charming and bubbly style of acting.

At the peak of her career, she was a household name in America. She is most popularly known for a character named “Jeanni” she played in a tv sitcom.

Barbara started young and became a successful actor in her adulthood. The actress has played roles in all forms of film on tv as well as in the cinema.

Apart from movies and filmmaking, Barbara also had a career in music in her early years. The actress has been open about her thoughts all her life. She has also written several books that take inspiration from her life and her works.

Her parents divorced when she was still young. She then migrated to San Francisco, where her mother married Harrison Connor Huffman.

Her family was badly affected by the depression in the 30s. During this period, they had a hard time because of financial instability.

Barbara began learning music at 16 after becoming a part of Actor’s Equity. She attended the San Francisco Conservatory of Music. She later went to Elizabeth Holloway School of Theatre.

Eden had also taken part in the Miss California Pageant. Her first experience in front of the camera was for an uncredited role of a college girl in Back From Eternity.

Born on the 23rd of August in 1931, Eden is 91 years old as writing. The actress has been consistently working in the film industry for more than 70  years now.

Talking about her physique, Eden stands at a height of around 5 ft 4 inches. She has blue-colored eyes and blonde hair. The actress is still in great health because of a strict diet and exercise.

Barbara began her professional career with West Point in the year 1956. Since then, the actress has been credited for her works in more than 90 works of cinema, including movies, tv-series, and shows.

Her last work was in a movie named My Adventures with Santa, where she started as Mrs. Claus. She was appreciated for her work in a film named From the Terrace.

She played the role of a character named Clemmie Shreve in the movie. I Dream of Jeannie has been the most popular and successful work of her life.

The actress plays the role of the lead character Jeannie in the sitcom. She played the role for more than five years. Along with the role of Jeannie, she also played Jeannie’s evil twin and Jeannie’s mother at different periods.

I Dream of Jeannie was one of the famous shows in 1965. The show ran for five years until 1975 and lasted for five seasons.

The Tv show would go on for longer if the episode were not aired. The duo Eden and Hagman had beautiful chemistry that mesmerized every fan.

Their chemistry was awesome, and fans could sense something was happening between them. To increase the viewership for the show, NBC staged a fake wedding for the duo one week prior to the wedding episode that was going to air.

Surprisingly journalists, Tv writers, and every celebrity from the country were invited to their fake wedding to make it look like they had plenty of guests. Eden was well aware that the wedding episode would fail, which was totally against the plan.

The show turned out to be a disaster when Eden the Jeannie was going to get married to Hagman, the human. The show once had a rule that the Jeannie could not be pictured but at the wedding, there were many photographers, yet they were photographed.

Even more, the tv show was about the build-up of sexual tension between Tony and Jeannie. As she married another guy, the tension went all away.

Fans loathed the public stunt, called their wedding insincere, and eventually turned up against the actors and character. When the wedding episode was aired, fans were tremendously disappointed.

Eden received her first honor in 1988 when she received her star on the Walk of Fame. She later went on to win the 2003 Favorite Dual-Role Character at TV Land Award.

Eden received it for the role of Jeannie and her evil twin. She also won Best Female TV Star at the Bravo Otto Germany in 1972.

Music and Other Works

Who is Barbara Eden Husband?

Eden began dating Michael Ansara and married him in January of 1958. The couple divorced in 1974. She has one child from her relationship with Michael Ansara.

After her first relationship, Eden married Charles Donald Fegert, an Executive at the Chicago Sun-Times. The couple ended their relationship with divorce in 1983.

She then went on to marry Jon Eicholtz in 1991. Jon Eicholtz is a professional architect as well as involved in philanthropy. The couple is still married and has been going strong since their meeting.

Eden has a reported net worth estimated to be around $10 million. Most of her wealth is thanks to her roles in movies and TV series. She has also learned quite a bit about wealth from selling her books.

There aren’t any known businesses she has invested in. Most of the earnings might be from the movies and series.

However, the exact information on assets is not known. If anything on the mansions or cars comes out, readers will be made aware.

Barbara is active on almost all popular social media accounts. She has a large following both on her Instagram as well as on her Twitter account.

She uses her accounts to interact and communicate with her fans and followers.

Eden’s current husband’s name is Jon Eicholtz. He is a real estate businessman and architect. The couple married in 1991 and are still in a strong relationship.

Eden’s only son Matthew Ansara died an unfortunate death in the year 2001. Matthew was just 35 when he died. The cause of his death turned out to be a drug overdose.

Sadly, Barbara is the only major character still alive from the iconic tv show. All the other cast members like Larry Hagman, Bil Daily, Hayden Rorke, etc., have already died.